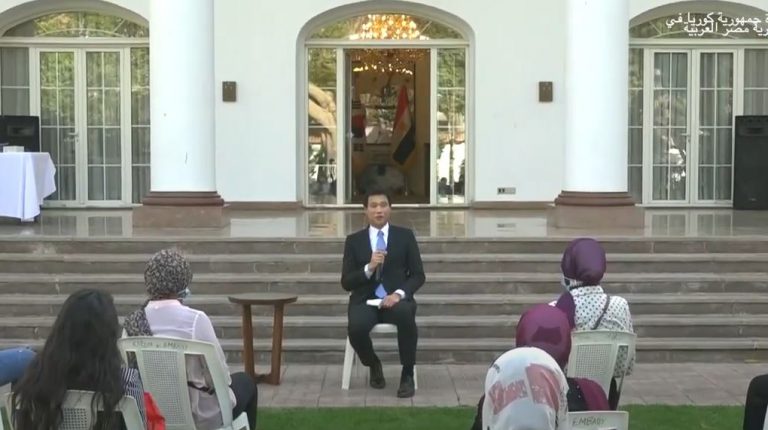 South Korea’s Ambassador to Egypt Hong Jin-wook has announced that his country’s relations with Egypt have witnessed outstanding achievements recently in various areas of cooperation.

He added that Egypt is a central country in the Middle East and Africa (MEA) region, and that its strategic position between Asia, Africa, and Europe qualifies it as a leader for the entire region.

Ambassador Hong’s remarks came during his meeting with a group of students from the Korean Language Department at Ain Shams University’s Alsun Faculty. The meeting took place at his residence, where the two sides shared insights into ways of strengthening bilateral relations between the two countries.

Hong also stressed the role of Egyptian students who speak the Korean language in promoting understanding and cultural exchange between the two countries.

Amid strict precautionary measures, there was an open dialogue between the ambassador and students on: the similarities between the Korean and Egyptian cultures; traditional holidays in Korea; the Ramadan atmosphere in Egypt; as well as the ambassador’s one-day fasting experience at the beginning of Ramadan.

The Ambassador participated in a cultural contest with the students, and honoured the winners. For their part, the students expressed their gratitude for attending this important meeting.