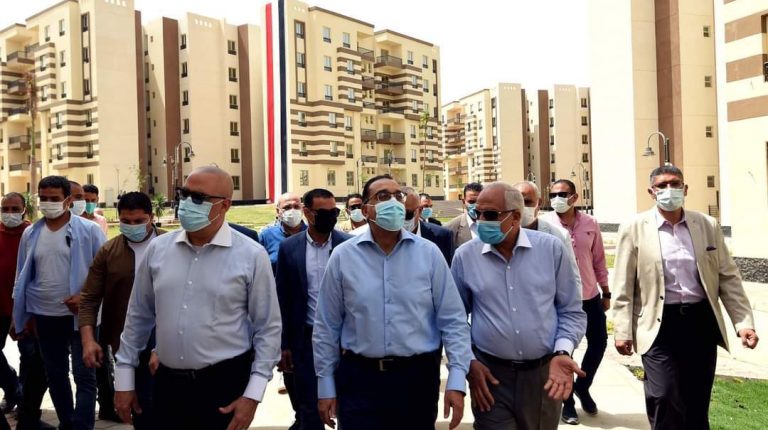 Egypt’s Prime Minister Mostafa Madbouly ordered, on Monday, the speedy completion of all services in the October Gardens residential area, which was recently established for the residents of Giza’s unplanned settlements.

Madbouly’s remarks came during his inspection tour of the October Gardens residential area, during which he also inspected a number of road axes in Giza governorate.

During his tour, Madbouly inspected a finished housing unit, and expressed his admiration for the level of finishing and furnishing. He noted that the Egyptian Government serves the country’s citizens, and tries to meet their aspirations for better living standards.

Meanwhile, El Gazzar asserted that the new project includes implementing 104 residential units. About 98% of the project has been completed, including the infrastructure phase, with the minister also confirming that this project is an alternative for slums in Giza Governorate.

El Gazzar indicated that the project aims to solve many of the traffic problems that Giza governorate faces, and adds new connections lines between both the governorates of Giza to Cairo.

He added that the project’s implementation in one of the busiest areas in Greater Cairo, which is full of utility networks and adjacent to the metro and railway systems, requires continuous coordination with the concerned authorities. This ensures that alternative roads are provided to facilitate traffic in the area during the implementation period.

The Prime Minister also inspected the implementation works on the Muhammad Anwar Sadat Axis. The work cost a total of about EGP 100m, and lies parallel with Haram Street, one of Giza’s main streets.

This axis will contribute to absorbing traffic movement in the area, as well as reducing the traffic density on Haram Street.