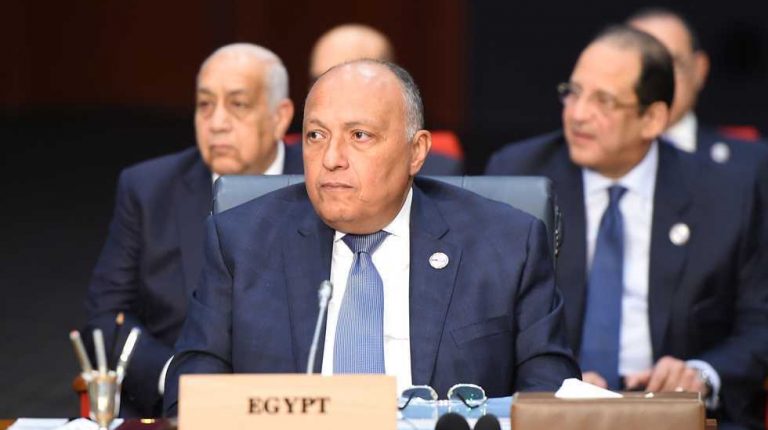 Egypt’s Minister of Foreign Affairs Sameh Shoukry held a telephone meeting, on Monday, with his Saudi counterpart Prince Faisal bin Farhan, as part of continuous coordination and consultation between the two countries.

Ahmed Hafez, spokesperson for Egypt’s Ministry of Foreign Affairs, said the two sides discussed the rapid developments in Palestine, and the recent Israeli incursions into the Al-Aqsa Mosque.

Shoukry briefed his Saudi counterpart on the contact Egypt is making in this regard, stressing the need for Israel to assume its responsibility in stopping such violations. This should take place in accordance with the rules of international law, and to provide the necessary protection for Palestinian civilians.

The call witnessed an agreement on the need to give priority to political solutions to all regional crises, in a way that ensures stability is strengthened, and that all parties respect the rules of international law.

The contact also dealt with ways to strengthen bilateral relations between Egypt and Saudi Arabia, and to push forward their development in various fields. This would implement the directives of the political leadership in the two countries, in a way that reflects the strong historical fraternal relations that unite the two brotherly peoples.

Shoukry also received a phone call from Tor Wennesland, the UN Special Envoy for the Middle East Peace Process. The latter noted his keenness to hold the call prior to his participation in United Nations (UN) Security Council consultations, aimed at dealing with the developments in Jerusalem and the Palestinian territories.

Wennesland briefed Shoukry on his contact with the Israeli side to control the situation in Jerusalem and around the Al-Aqsa Mosque. This is with a view to allow worshipers to freely perform prayers at the mosque, and to take all necessary measures to protect the mosque and the holy sites in the city.

Shoukry affirmed the Israeli government’s responsibility to secure the situation in Jerusalem and keep it under control. He also presented the extensive contacts Egypt is making, and its rejection of actions directed against worshipers.

The minister pointed to the Arab moves and preparation for the Arab League Council the ministerial meeting on Tuesday.

On the other hand, Shoukry held a meeting at the Ministry of Foreign Affairs headquarters with Ambassador Tariq Tayel, Head of Egypt’s Mission in Ramallah.

Tayel briefed Shoukry on the latest developments in Jerusalem, whether related to the occupation forces’ storming of the Al-Aqsa Mosque, or the events in the Sheikh Jarrah neighborhood of Jerusalem.

Shoukry gave Tayel a message of support to take back to the Palestinians, stressing that Egypt would continue to make efforts to put an end to these developments quickly.