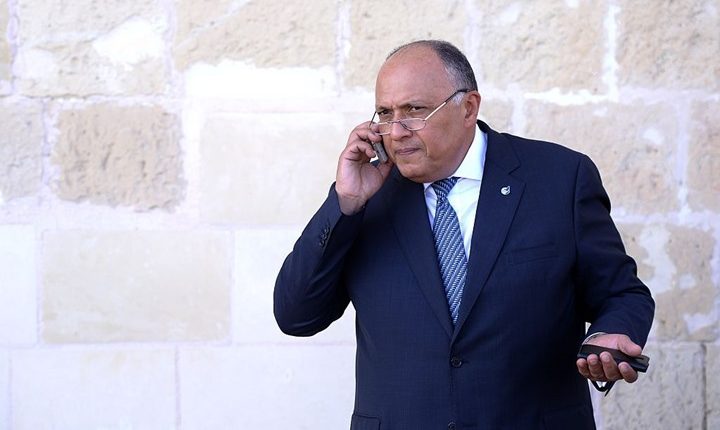 Egypt’s Minister of Foreign Affairs Sameh Shoukry held a telephone meeting with his Israeli counterpart Gabi Ashkenazi, on Wednesday evening, during which he stressed the need to stop Israeli attacks on Palestinian territories.

Shoukry also highlighted the importance of working to spare the peoples of the region further escalation, and avoid resorting to military means.

He stressed Egypt’s keenness to ensure stability in the region on the basis of settling issues through diplomatic routes and through negotiations.

Shoukry noted that recent developments underscore the need to resume Palestinian-Israeli peace efforts as soon as possible and without delay.

During the calls, the Egyptian minister discussed the deterioration in the situation found in the Palestinian territories as a result of the confrontations in Jerusalem.

Shoukry also proposed measures and urgent contacts to stop the confrontation and attacks on civilians, and preserve the rights of the Palestinian people in the occupied territories.

He stressed that the current clashes confirm the need to resume peace efforts that carry a real possibility of reaching the establishment of an independent Palestinian state along the 1967 lines, with East Jerusalem as its capital.

Shoukry also stressed the need to end the conflict through a just and lasting solution that stabilises the situation in the Palestinian territories, and contributes to regional stability.

According to a statement released by Egypt’s Ministry of Foreign Affairs, Shoukry will intensify contacts with his counterparts across the Middle East to end the current crisis.

This will also work to move towards a settlement of the Palestinian-Israeli conflict, one of the most important factors in causing regional instability.