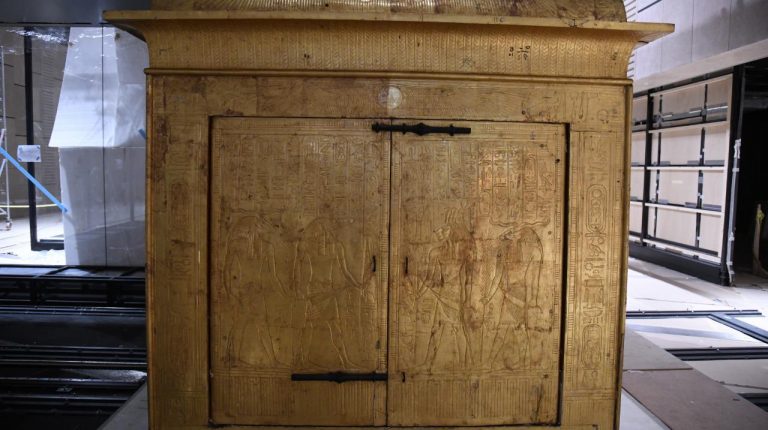 The Grand Egyptian Museum (GEM) in Giza has completed installing the third shrine of the Pharaoh Tutankhamun, which was recently received by the museum in preparation for its display at its designated location.

Atef Muftah, General Supervisor at the GEM and the surrounding area, said that the installation of the shrine took about 14 hours of work.

Tayeb Abbas, Assistant Minister for Archaeological Affairs at the GEM, noted that the museum’s staff removed the protective layers from the walls of the shrine, which were used to protect them during the transfer from their previous location, and cleaned all gilded surfaces.

Issa Zidan, Director General of Executive Affairs for Restoration and Antiquities Transfer at the museum, confirmed that the teams at the Egyptian Museum in Tahrir Square and the GEM carried out restoration, support, and protection work for the first and second shrines of the young king.

These are located at the Egyptian Museum in Tahrir Square, where the scientific documentation work for them also took place. This includes X-rays, photography, and video work, which was completed and a comprehensive report was prepared on the status of each shrine, which would help in the process of dismantling and regrouping of the shrines.

The first shrine is the largest artefact belonging to the Pharaoh Tutankhamun, and weighs 2,600 kg.

The third shrine weighs about 1,142 kg, and features a frieze, with a double door closed with a royal seal.

The shrine consists of a roof decorated with a winged sun disc and eight birds placed under the Pharaoh’s titles, whilst the ceiling also contains inscriptions on the inside, as well as a gate with inscriptions and texts from the Book of the Dead.