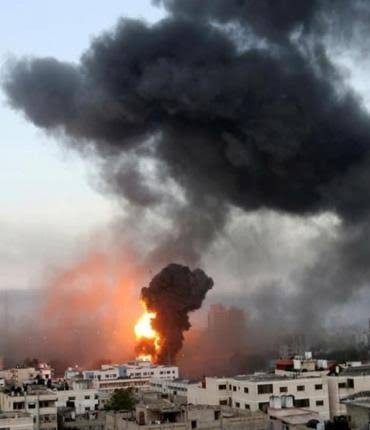 The death toll of Israeli attacks on the Gaza Strip has reached139, including 39 children and 22 women, Palestinian medical sources announced on Saturday.

Israeli occupation forces have been striking civilian targets in Gaza for six days.

According to the Palestinian News Agency, more than 1,050 Palestinians were injured in the Israeli strikes, over 40 of them were in critical condition.

Earlier, the Palestinian Embassy in Cairo said that 10 Egyptian ambulances were dispatched to Gaza through Rafah border crossing to transfer the wounded Palestinian to Egyptian hospitals in Sinai for treatment. The Egyptian government has allocated three hospitals in Arish, Bir al-Abd, and Ismailia to receive and treat Palestinian victims of Gaza strikes.

The Israeli strikes, which began on Monday, have been deemed the most serious since 2014.

Meanwhile, the Izz ad-Din al-Qassam Brigades, the military wing of the Islamic Resistance Movement (Hamas), has fired dozens of locally made rockets at Tel Aviv in retaliation for the recent Israeli attacks against Palestinian protesters near Al-AqsaMosque in Jerusalem.

Egypt has been pushing for a ceasefire since Friday, two Egyptian security sources told Reuters.

The Egyptian and Jordanian foreign ministers discussed, on Friday, possible ways to stop hostilities in the Gaza Strip as the assault continued for five days.

The ministers agreed on the necessity of a serious move towards the resumption of the peace process between Palestine and Israel. They also discussed providing a genuine political prospect that aims to end the conflict through a fair and permanent solution that ensures the establishment of an independent Palestinian state with East Jerusalem as its capital.