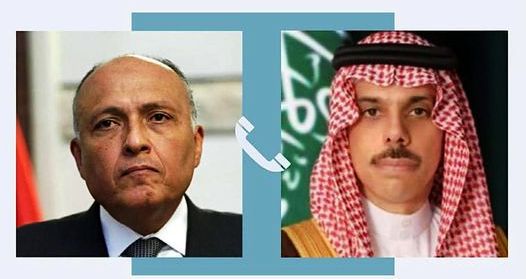 Egypt’s Minister of Foreign Affairs Sameh Shoukry discussed, during a phone call on Saturday, with his Saudi counterpart Faisal bin Farhan, the recent developments in the Palestinian territories and the Israeli aggression on the Gaza Strip.

The conversation comes within the framework of coordination between the two ministers to deal with the situation in Palestine and prevent further escalation and tension.

Ambassador Ahmed Hafez, the official spokesperson for the Egyptian Ministry of Foreign Affairs, said that both ministers exchanged views on how to address the crisis and restore calm in the region.

Minister Shoukry reviewed the latest Egyptian efforts with all concerned parties to reach an immediate ceasefire and end the bloodshed.

The two ministers agreed to maintain consultation and coordination during the coming period to end the military escalation in the Gaza Strip.

In this context, they stressed the importance of working to resume peace talks, as it is the main track that guarantees the two-state solution.

It would also realize all legitimate Palestinian rights, and lead to the establishment of an independent Palestinian state with East Jerusalem as its capital.