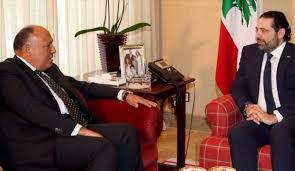 The two parties discussed developments and efforts to form a new Lebanese cabinet capable of solving the economic crisis in the country.

Minister Shoukry affirmed Egypt’s keenness to coordinate with Hariri and other Lebanese political leaders in order to spare the Lebanese people further problems in the event that cabinet formation attempts failed.

In addition, both officials discussed the recent developments in the Palestinian territories and the Egyptian efforts to reach a ceasefire between Israel and Palestine.

Lebanon has been without an empowered government since caretaker Prime Minister Hassan Diab’s cabinet resigned in the aftermath of the catastrophic Beirut port explosion in August 2020.

Political bickering over the new government’s formation has dragged on while the country’s economy and national currency have plummeted to record low.