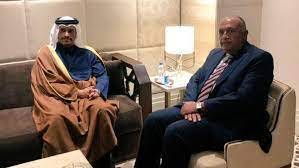 During the call, the two ministers discussed recent Israeli attacks in the West Bank and Gaza, and agreed on the importance of working to reach an immediate ceasefire between the Palestinians and Israelis.

They also reviewed and agreed to continue bilateral coordination, as well coordination in the regional and international contexts, regarding the interests of the Palestinian people and reaching a ceasefire between the two sides.

Also on Sunday, both Shoukry and Al Thani separately received phone calls from US Secretary of State Antony Blinken to discuss the violence in Gaza and the West Bank.

The three sides spoke about efforts to restore calm in Israel, and in the West Bank and Gaza, in light of the tragic loss of civilian life.

They also discussed the recent Israeli attacks on worshippers at the Al Aqsa compound and the attack on the besieged Gaza Strip.

Shoukry stressed the need for urgent action by the international community to stop the repeated brutal Israeli attacks against civilians in Gaza and the blessed Al Aqsa Mosque.