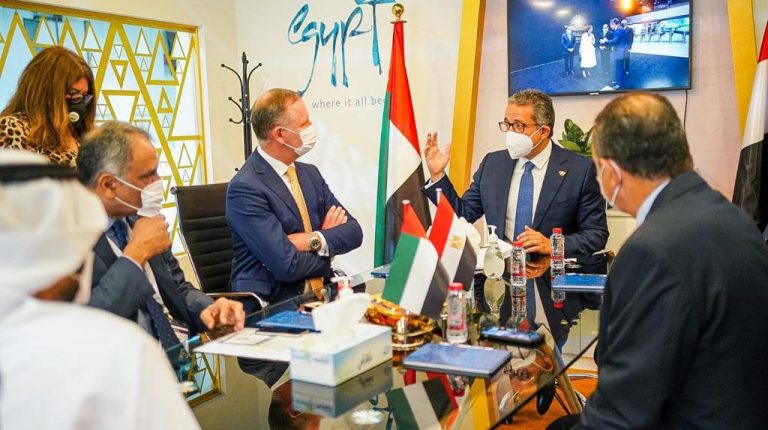 Egypt’s Minister of Tourism and Antiquities Khaled El-Anani has revealed that the average number of tourists visiting the country in April 2021 is close to 50% of the average monthly number of 2019.

El-Anani also said that the numbers illustrate that the countries of origin of those tourists trust Egypt as a tourist destination.

The minister pointed to the gradual improvement in the performance of inbound tourism since the resumption of travel last July. He said that, during this period, Egypt received 3 million tourists from more than 20 countries,

His remarks were made during the extensive meetings held on the sidelines of Egypt’s participation at the 28th Arab Tourism Market (ATM) 2021. The event opened on Sunday, and will continue until 19 May.

During these meetings, the minister reviewed the efforts Egypt has undertaken to deal with the novel coronavirus (COVID-19) crisis. He reviewed the hygiene and safety regulations applied at all tourist facilities, hotels, museums, and archaeological sites in Egypt.

The minister also highlighted the training programmes conducted by the Ministry of Tourism and Antiquities to educate all workers in the tourism sector about the coronavirus.

The minister said that, within a matter of days, the Minister of Health and Population Hala Zayed will announce the completion of the vaccination programme targeting all workers in the Egyptian tourism sector in the governorates of South Sinai and the Red Sea.

The programme aimed to provide all workers in the sector in these two governorates, which receive the lion’s share of Egypt’s tourists, with vaccines against the coronavirus.

El-Anani emphasised the close cooperation between his ministry and its stakeholders in the tourism sector, such as tour operators and airlines.

He spoke of the incentives Egypt has offered to boost inbound tourism and motivate tourists to visit the country. This includes: the launch of a new aviation incentive programme; a 15 cent per gallon reduction in aircraft fuel prices; a 50% reduction on landing and housing fees; and a 20% reduction on ground handling fees at Egyptian airports in tourist governorates until 31 October 2021.

El-Anani explained that the Ministry of Tourism and Antiquities launched a marketing campaign in the Arab market a few days ago, which will be intensified in the coming period.

He added that the ministry will also launch an international promotional campaign this autumn, which will last for three years and which aims to attract more tourists to Egypt.

He said that Egypt is working on opening new hotels and tourist resorts during the coming period, in addition to many new museums, the most important of which is the Grand Egyptian Museum (GEM).

El-Anani added that there are new cities being established in Egypt that will serve as year-round tourist destinations, including Galala City on the Gulf of Suez coast, and New Alamein on the North Coast.

In a related context, the minister met with representatives of Egyptian hotels and tourism companies participating in the exhibition, where he stressed the importance of maintaining the reputation of the Egyptian tourist destination.

He particularly stressed that this should take place through full compliance with the application of precautionary measures and hygiene safety controls.

El-Anani pointed out that the commitment of all to these controls was a major reason for the continuation of, and increase in, tourism numbers to Egypt since the resumption of tourism last July.

Egypt’s tourism to recover to 2019 levels not before 2024: Ex-ETF Chairperson