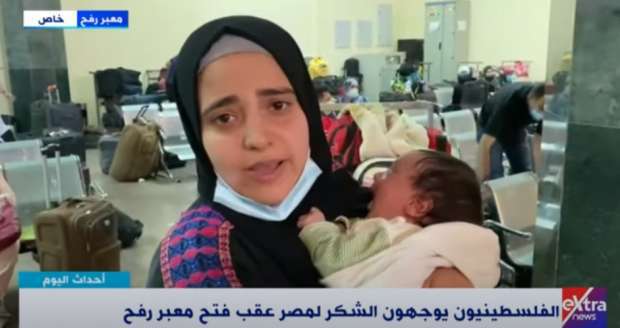 Egypt’s Extra News published footage from the Rafah border crossing between Egypt and Gaza, in which many Palestinians thanked the Egyptian state, leadership, and people, for supporting their cause.

One Palestinian man thanked the Egyptian people and the country’s political leadership, headed by President Abdel Fattah Al-Sisi, describing him as “the father of the Arabs”.

He asserted that, without Al-Sisi, all Arabs would have disintegrated, and confirmed that the Egyptians have a significant role in preserving the Arab world.

Meanwhile, a Palestinian woman asserted her appreciation of Egyptian people and the country’s policy that stood with the Palestinian people. She pointed to Egypt opening its border crossing with Palestine, in order to aid those seeking help.

She said that the Egypt has done its best to help Palestinian citizens, and explained that the country had initially limited the number of citizens it allowed to enter.  However, due to the many people wishing to enter, they increased the number allowed in.

She affirmed, “The Egyptian people always support us, we are one people, and one family.”