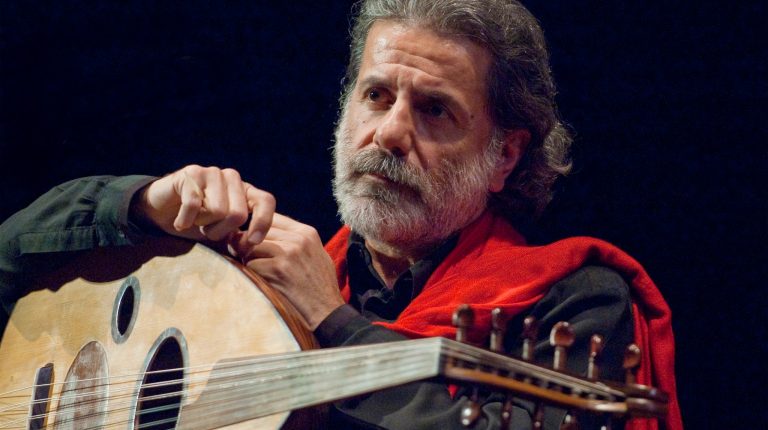 Renowned Lebanese singer, oud player, and composer Marcel Khalife has sent a message of solidarity with the Palestinian people amid Israeli aggression on Palestinian territories.

Writing on Facebook, Khalife said, “I am a Lebanese, Palestinian, Arab citizen: I condemn in the strongest terms the brutal aggressive crimes against the Palestinian people in Jerusalem, the West Bank, Gaza, the Galilee, the Negev triangle, and every inch of the Palestinian land.”

He further asserted that the Israeli attacks are considered a blatant aggression against the rights of the Palestinian people, human values, and on the principles of truth, justice and dignity.

He added “I declare my boundless solidarity with the Palestinian people in the face of the killing and slaughter.”

Khalife is one of many voices from within the international artistic community who have condemned the ongoing Israeli aggression on Palestine lands.

The week-long Palestinian-Israeli escalation has been deemed the most serious since 2014, as Hamas fired rockets at Jerusalem and Tel Aviv in retaliation for hostilities by Israeli police against Palestinian protesters near the Al-Aqsa Mosque.

The escalation, which initially started on Monday, brought the death toll to 198 in Gaza, including 58 children and 34 women, health officials said, while Israel has reported 10 dead.

Born in 1950 in the Lebanese coastal town of Amchit, the town’s sound of wind, birds, sea, fishermen, church bells, and silence, have all inspired Khalife’s music.

Throughout his career, the musician has been always very vocal defending the Palestinian cause in his creativity and statements.

Starting with his Al-Mayadeen ensemble, which he formed in 1976 to perform songs he wrote, Khalife’s music has always been nurtured by Arabic traditions and enriched with Western harmonies.

He frequently sings poetry by renowned Palestinian poet Mahmoud Darwish, referencing nationalism and revolution, and has also used his music to defend his own homeland, Lebanon.

Unable to continue living in war-torn Lebanon, Khalife moved to Paris where he connected with some friends and tried to record his music. Joining love with nationalism, expressing anguish in the face of injustice, Khalife touches on human emotions.

Basing his songs on Darwish’s poetry, the Al-Mayadeen ensemble delivered music which, due to its content, geographical and temporal positioning, became political.

Yet, despite singing songs infused with revolutionary yearnings, Khalife does not consider himself a political activist.

Throughout his career, he has performed at many fundraising concerts, of which proceeds were directed to hospitals, cultural centres, and many other institutions in need.

He sees politics as a “horrible thing”, and hopes that “politicians are sent to an island where they can rule themselves and let the people live”.

Khalife’s music and refusal to remain silent about injustice has garnered him over 20 prestigious international awards, countless honours and recognitions.

Among the most prestigious of the past decade are: the National Palestine Medal (2011); the UNESCO Artist For Peace, from France (2005); the Freemuse Ambassador, from Denmark (2007); and the Cultural and Artistic Recognition Award by the Tunisian Ministry of Culture (2012).

Apart from his many songs, Khalife has numerous instrumental compositions to his name: The Symphony of Return, the Rababa Concerto, Sharq, Suite for Oud and Orchestra, Mouda’aba (Caress), Diwan Al-Oud, Jadal Oud duo, Oud Quartet, and many others.

Khalife also composes music for film, and has produced music for many dance performances by prominent troupes such as the Caracalla Dance Theatre, Sarab Ensemble, and Rimah.