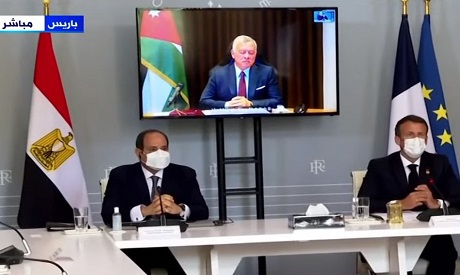 This came during his meeting with his French counterpart Emmanuel Macron and King Abdullah II of Jordan in a tripartite summit in the French capital, Paris, aimed at reaching a ceasefire between Palestine and Israel.

According to Al-Sisi, rebuilding will be done be Egyptian companies specializing in reconstruction process.

Egypt and Jordan have pushed for an end, as soon as possible, to the acts of violence, and for a comprehensive solution to be reached that guarantees the rights of the Palestinian people.

The two Arab countries confirmed the importance of reaching a political solution that would guarantee the establishment of an independent, sovereign, and viable Palestinian state, with East Jerusalem as its capital.

The summit also stressed the need for the international community to move effectively to stop the Israeli attacks, as well as putting an end to the aggression on the Palestinian territories. This would also see continued efforts to advance the peace process.