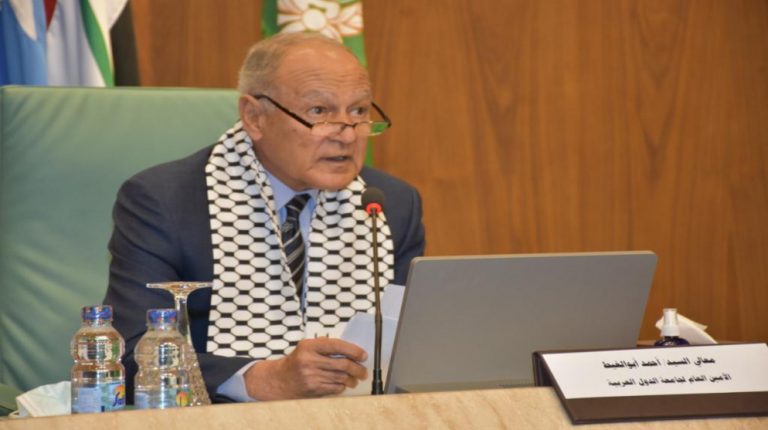 The Arab League has said that Arab diplomatic work is currently continuing in the corridors of the United Nations (UN) to stop Israeli aggression on the Palestinians.

The regional organisation’s remarks came during a speech by Ahmed Aboul Gheit, Secretary-General of the Arab League, on Wednesday.

The session took place at an Arab Parliament emergency session to discuss Israeli attacks against the Palestinians.

Aboul Gheit stated that the Arab moves aim to provide protection for the Palestinians, and hold the Israeli occupation accountable for its crimes.

“Our efforts are to win the battle of public opinion, which in this era may outweigh the importance of the battle of arms, is the least that we can offer to our brothers in Palestine,” Aboul Gheit said.

He cautioned that Israeli targets in the Gaza Strip included schools, homes, hospitals, and media headquarters.

Aboul Gheit said, “Our duty is to convey the Palestinian voice to the world at this rare moment when they are ready to hear the voice of truth, and to remind us that these bloody events began in the holy month of Ramadan.”

In what he termed a deliberate provocation, Aboul Gheit said that the occupation authorities sought to restrict Jerusalem residents in their acts of worship, and their right to gather in the Old City.

“It is our duty to remind the world that these events that are escalating today in Gaza and the other occupied territories have begun in Jerusalem, because Jerusalem is under occupation,” the Arab League head added.

“It is a mistake to say that the occupation practices crimes, because the occupation in itself is the most heinous crime, and it is an ongoing daily crime against all of humanity.”

He pointed out that the proposed removal of Palestinians from Sheikh Jarrah has been happening in other neighbourhoods in Jerusalem for years. It forms part of an ongoing plan to isolate Jerusalem’s non-Jewish residents from the city, and to surround the Old City with a continuous belt of Jewish presence.

Aboul Gheit expressed regret that the right-wing policies have become an integral part of the existing government in Israel.

The Arab League saluted the Palestinians who did not accept expulsion from their homes at night.