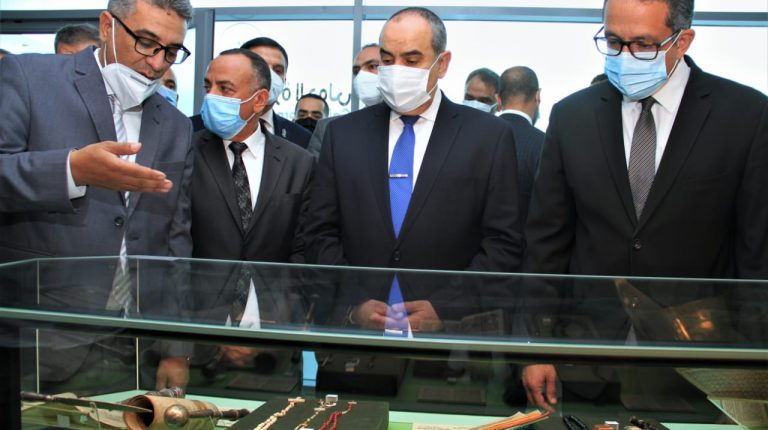 Egypt’s Ministers of Tourism and Antiquities Khaled El-Anani, and Aviation Mohamed Manar Enaba, have inaugurated the Cairo International Airport Museums, to mark International Museum Day, which falls on 18 May every year.

The museums can be found in Terminals 2 and 3 of the Cairo International Airport, with the 100 sqm museum in Terminal 2 displaying 304 artefacts. These reflect the Ancient Egyptian interest in the other world as a place for eternal life, as well as highlighting the artistic features of Ancient Egyptian, Roman, Greek, Coptic, Islamic and modern times.

The museum also includes pieces highlighting Egypt’s role as the cradle of heavenly religions that have gathered under its shadow in peace and harmony.

The museum at Terminal 3, meanwhile, covers a total area of 150 sqm. It houses 59 artefacts carefully selected by the Supreme Committee for Museums Display from the collections at the Egyptian Museum in Tahrir Square, the Coptic Museum, and the Museum of Islamic Art in Bab Al-Khalq.

The artefacts on display date from the Ancient Egyptian period, as well as the Greek and Roman periods. Among the most important objects on display is a statue of an Ancient Egyptian scribe, two pre-dynastic pieces, a collection of statues from the Greek and Roman periods, a statue of Queen Hatshepsut, some rare pieces, and Coptic icons from the 18th Century. There is also a collection of coins, copies of the Qur’an, and decorative dishes dating back to different Islamic eras.

El-Anani expressed his happiness at the opening of these two museums, describing them as a means of promoting Egypt and its civilisation, especially for cultural tourism.

Meanwhile, Enaba said that Egyptian airports are the country’s first gateway to the world. He noted that the idea of establishing and developing the museum is an important means of developing transit tourism and promoting new tourism.

This is due to the museums both holding distinguished locations within Cairo International Airport, which is both central and an important cultural window to the world. It attracts travellers, especially transit passengers, and introduce tourists to the ancient Egyptian civilization and great Egyptian heritage.

Enaba added that the latest museum openings come as a first step that will be recreated at other Egyptian airports, especially those in tourism hotspots around the country.

The minister pointed out that the presence of an archaeological museum at all Egyptian airports is an influential and important factor in attracting tourism. It will also positively affect the flow of culture and knowledge to benefit the Egyptian economy.

To encourage travellers to visit these museums, tickets have been set at low prices, with a ticket per museum of $3 or LE 50 for a foreign visitor and LE 25 for Egyptian visitors.