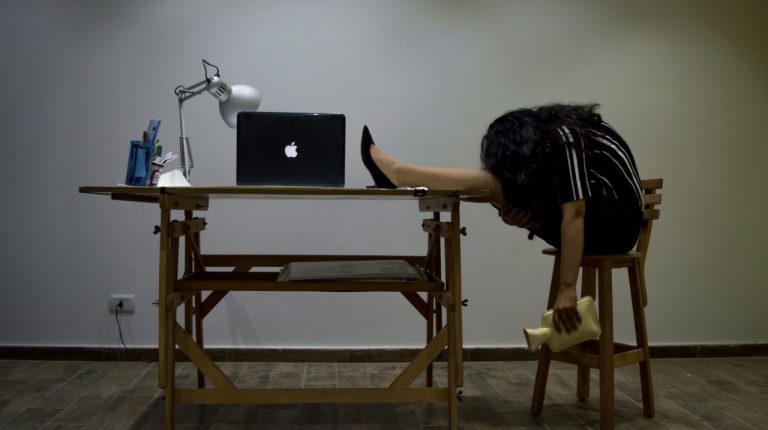 There is a common adage that a picture is worth a thousand words. With this in mind, the female photographer Joy Khoury has shown in picture form the daily pressures that women are exposed to.

She created a photo session that includes a series of photographic self-portraits, entitled “’Below Sea level”, that expresses her message without the need for saying a word.

The photo session went viral on social media, with at least 600,000 views in just two days due to the reality of Khoury’s documenting the daily pressures that women are exposed to.

Daily News Egypt sat down with Khoury to find out more about both the artist herself, and her project.

“I am still a second year student in the Faculty of Architecture at the German University in Cairo (GUC), and I discovered a love for photography when I was 15 years,” Khoury said, “I believe that photography gives me identity among other people, as everyone knows that I love photography.”

With her interest in photography growing, she decided to professionally improve her hobby by studying on her own. This lead to her reading many books and articles, as well as viewing many videos, where she picked up various photography fundamentals and techniques until she became more qualified and worked with professional photographers.

Khoury said despite photography not being her field of study, her family was very supportive and encouraging her to achieve her dream.

She added that she loves to express her thoughts through photography, so throughout the “’Below Sea level” project, she was aiming to express the daily pressures that females are exposed to.

“In order to choose what kinds or forms of women’s daily pressures to express in my session, I conducted a small survey among women of different ages and backgrounds,” Khoury said, “I found a lot of pressures, but I used the most common pressures from among the responses.”

After thinking about the daily pressures that she and other girls are exposed to, she identified five common pressures.

One of these was the pain frequently associated with the menstrual cycle, when women are required to finish their daily tasks when in pain. Other pressures women face are also frequently taking on the responsibility of motherhood, a denial of a woman’s ownership of her body and sexual harassment, household duties that are always associated with the female, as well as the standard of physical beauty that women are asked to fit into.

“I got inspired to make this project from my mother, as my mother was able to make balance between her career as an engineer, her house duties, and her own self,” Khoury said, “My mother is a symbol of strength, sacrifice, and unconditional love.”

Khoury chose to shoot the pictures inside one of the rooms in her house, where she set up scenarios that challenged the presence of simple tools and dim lighting. This allowed her to avoid relying on high-cost images, with each picture’s simplicity and rawness aiming to grab the attention of viewers, not the accessories or the quality of the photo.

She said that all the materials used in the self-portraits were related to her mother, from clothes to lipstick, her favourite chair, and even coffee cups.

In order to express her thoughts in photos, Khoury appears in one of the pictures placing many posters around her entire body to express rejection of sexual harassment. In another photo, she put a “basket” on her head to indicate the burdens of motherhood, whilst in another, she is lying on the ground while her feet carry coffee for her family members despite her own lack of energy, to relieve the stress of household burdens.

In another photo, Khoury pictures herself sitting slumped over at a table, hot water bottle in hand, as she performs her daily tasks. The picture itself aims to express the tiredness and lack of energy experienced during menstruation.

Of the reason why she chose title “Below Sea Level”, Khoury said that the name aims to express the idea of pressure. She explained that the pressure increases as you go below the surface of the water, and the lower you get, with breathing also becoming more difficult, and the restrictions become greater.

“This is exactly what women and girls suffer from, and despite this they are required to perform better and perform an immeasurable amount of burdensome tasks,” according to Khoury, “This is the purpose of my session and I want the idea to reach all the people.”

She also noted that her aspiration is to become a cinematic director and to set up more photo sessions to express ideas and feelings without any word.