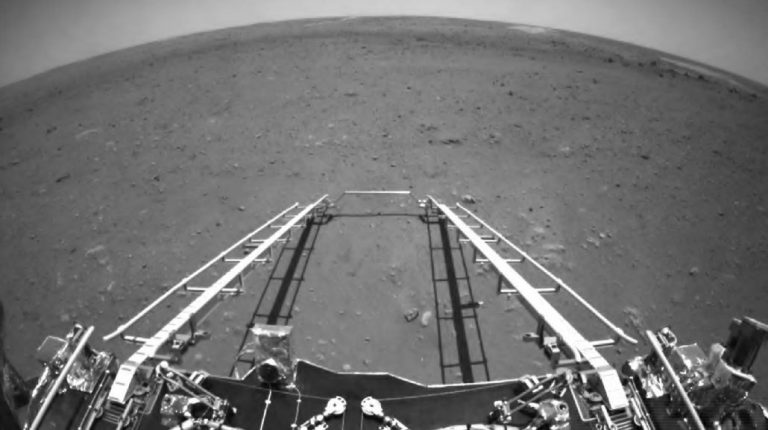 China has released photos and videos captured by China’s Mars probe Tianwen-1 during and after the country’s first landing on the red planet.

The lander carrying a rover of the Tianwen-1 mission touched down in the southern part of Utopia Planitia, a vast plain on the northern hemisphere of Mars, on May 15, becoming the country’s first probe to land on a planet other than Earth.

The first photograph, a black and white image, was taken by an obstacle avoidance camera installed in front of the Mars rover. The image shows that a ramp on the lander has been extended to the surface of Mars. The terrain of the rover’s forward direction is clearly visible in the image, and the horizon of Mars appears curved due to the wide-angle lens.

The second image, a color photo, was taken by the navigation camera towards the rear of the rover. The rover’s solar panels and antenna are seen unfolded, and the red soil and rocks on the Martian surface are clearly visible in the image.

The probe also sent back two videos taken by a camera on the orbiter, showing how the lander and the rover separated from the orbiter during landing.

Tianwen-1, consisting of an orbiter, a lander and a rover, was launched on July 23, 2020. It was the first step in China’s planetary exploration of the solar system, with the aim of completing orbiting, landing and roving on the red planet in one mission.

After landing last Saturday, the lander and rover established communication with the Earth.

On May 17, the orbiter entered orbit to relay communication between the rover and the Earth, and sent back images and data from the rover.

China’s Mars rover is now making preparations for moving down from the lander onto the Martian surface, CNSA said.