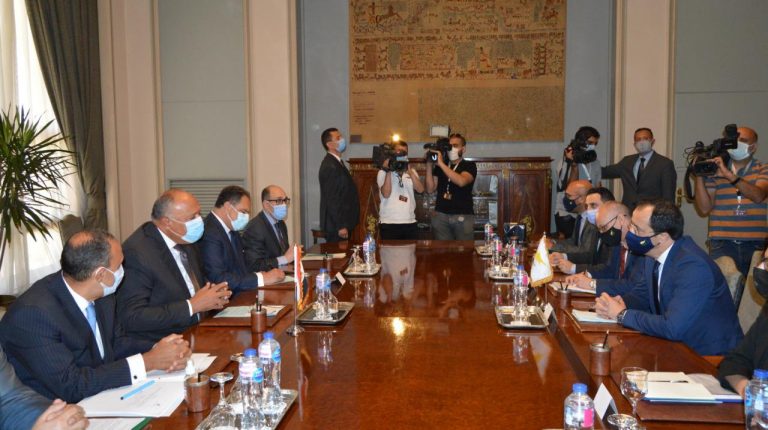 Egypt’s Minister of Foreign Affairs Sameh Shoukry met, on Saturday, with his Cypriot counterpart Nikos Christodoulides to share views on advancing cooperation between the two countries.

During the meeting, the two ministers also discussed methods of coordinating on a number of important regional issues of mutual interest.

Ahmed Hafez, spokesperson for Egypt’s Ministry of Foreign Affairs, said that Shoukry presented Egypt’s moves to stop the military escalation between the Palestinians and Israelis.

Shoukry explained that Egypt has been keen to work intensively to restore calm and is currently working to establish a ceasefire between the two sides.

At the same time, he stressed that the absence of any real horizon for the peace process could lead to a continued and renewed conflict between the two parties.

This would require intensified international efforts to relaunch the path of negotiations as soon as possible.

Hafez added that Shoukry and Christodoulides praised the strength and durability of bilateral relations of a strategic nature between Egypt and Cyprus.

These include the bonds of friendship between the two countries, as well as the continued cooperation and coordination in various aspects of bilateral cooperation at various levels.

The two ministers also agreed on the importance of accelerating the implementation of joint energy projects and promoting tourism cooperation between Egypt and Cyprus.

Hafez noted that the two ministers discussed all regional issues and issues of common concern, particularly Libya and the Eastern Mediterranean.

Visions were exchanged in this regard, with the emphasis on continuing their consultation in the coming period