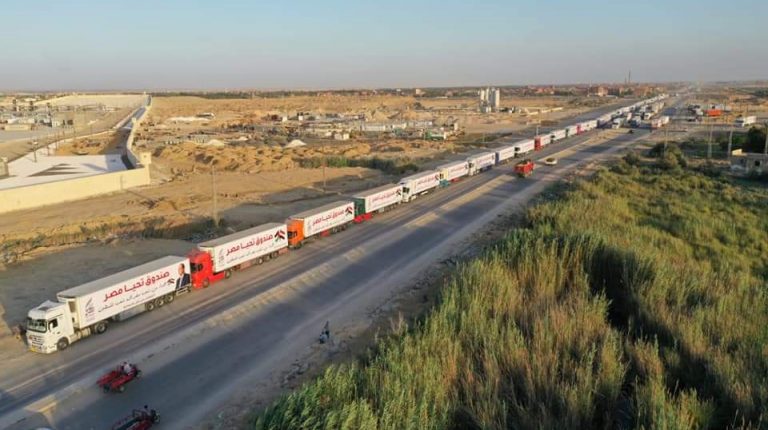 Egypt has donated the largest convoy of aid, including 130 trucks loaded with 2,500 tonnes of foodstuffs, medicines, baby milk, clothes, furniture, electrical appliances and other materials to Palestine.

Bassam Rady, spokesperson for the Egyptian Presidency, said that the aid implements directives by Egypt’s President Abdel Fattah Al-Sisi to support Palestinians in the Gaza Strip, with the aid provided through the Tahya Misr fund.

Hamas officials have said that Egypt sent a delegation to Israel, on Friday, to discuss ways to stabilise the ceasefire, including providing assistance to Palestinians in Gaza.

In statements to the Reuters news agency, on Saturday morning, the officials added that the Egyptian delegations undertook “shuttle” tours between Israel and Gaza to stabilise the truce. They noted that the Egyptian mediation will continue until Saturday.

Moreover, US Secretary of State Antony Blinken will visit Israel and the Palestinian Authority in the occupied West Bank on Wednesday and Thursday. The visit comes as part of Washington’s efforts to build on the Gaza truce, a source briefed on the planning said on Saturday.

Blinken’s Middle East trip will include a visit to Egypt, which mediated the Gaza truce between Israel and Hamas-led Palestinian militants, as well as to Jordan, the source said.

The ceasefire between the Israel and the Palestinians in the Gaza Strip lasted until Saturday, with officials clarifying that Egyptian mediators had consulted with the two sides about securing a long-term calm.

The ceasefire began before dawn on Friday, ending 11 days of cross-border bombardment that caused renewed devastation in Gaza, rocked Israel, and sparked international fears of a slide into a wider regional conflict.

Despite clashes between Israeli police and Palestinian protesters in Jerusalem on Friday, there were no reports of Hamas rockets fired from Gaza or Israeli military strikes on the Gaza Strip until Saturday morning.

On Thursday, US President Joe Biden said that Washington would work with the United Nations (UN) to deliver humanitarian and reconstruction aid to Gaza. This would come with guarantees against the use of funds to arm Hamas, which the West considers a terrorist group.