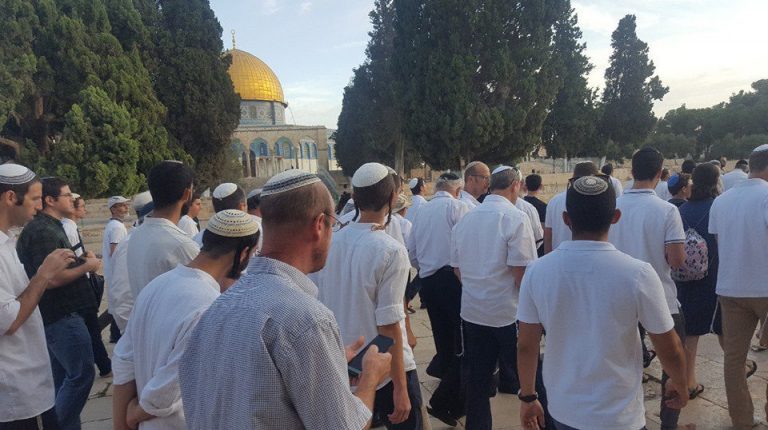 Tensions at the Al-Aqsa Mosque in the occupied eastern Jerusalem continued, on Sunday, as settlers stormed the Al-Aqsa mosque and Israeli occupation forces assaulted Palestinians.

On Saturday, Jerusalem residents called for gatherings to prevent Jewish extremist groups from storming the mosque. The Palestinian Authority called on the international community to intervene to help halt the Israeli violations.

More than 253 settlers stormed the courtyards of the Al-Aqsa Mosque, on Sunday, under intense guard from Israeli occupation forces. Moreover, the Israeli forces arrested four of the mosque’s employees alongside three young men, two of whom were later released.

Tensions began when Israeli soldiers violently arrested a Palestinian man, with the soldiers also assaulting Palestinians who tried to prevent them from making the arrest.

The Palestinian Authority warned against the ” return to the starting point” [of the tensions] if the storming of the Al-Aqsa Mosque and the siege of the Sheikh Jarrah neighbourhood in Jerusalem continues.

“We call on the US administration to intervene soon to prevent the Israeli policy of provocations and escalation,” it added.

In a statement, the Palestinian Ministry of Foreign Affairs condemned the continued incursions by the occupation forces, police, and settlers into the courtyards at the Al-Aqsa Mosque. The ministry described the incursions as disregarding the international stand that demanded Israel stop attacks on Jerusalem.

The statement added that the incursions “are a brutal provocation to the feelings of Muslims and a continuation of the aggression against our people and Jerusalem”. It also called on the international community to fulfil its legal and moral obligations towards the crimes of the occupation.

On Friday, Egypt led efforts to mediate a truce between the Israeli occupation and the Palestinian resistance movements, including an unconditional ceasefire in the besieged Gaza Strip.

US Secretary of State Antony Blinken is expected to visit the West Bank and Tel Aviv on Wednesday and Thursday, respectively, as part of the US’s efforts to ensure “calm in Gaza”. However, Israeli forces continue their aggressions against the Palestinians in Jerusalem and the occupied West Bank.