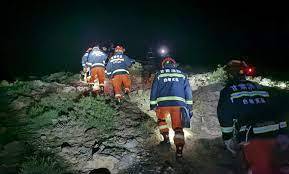 Egypt has expressed its condolences to China and the families of the 21 victims who died in a sudden storm while participating in a marathon in China’s Gansu Province.

Meanwhile, Egypt highlighted its solidarity and stand with the Government and people of China during this difficult time.

A wave of severe weather hit participants during a 100 km mountain marathon in northwest China’s Gansu Province, local authorities said in a press release on Sunday.

Another 151 participants were confirmed safe, including eight who suffered minor injuries and who were treated in hospital.

Zhang Xuezhen, mayor of Baiyin City, said it was a public safety incident caused by a sudden change in local weather, and that the province had set up a special team to continue investigating the cause of the accident.

The race was held on Saturday morning at the Yellow River Stone Forest site in Jingtai County, Baiyin. Participants suffered from a loss of body temperature due to a sudden drop in air temperature.

The local government launched an emergency response to the situation, and mobilised over 1,200 well-equipped rescuers to search for the missing.

The temperature dropped again during the night, due to the complex topography of the area, making search and rescue more difficult.