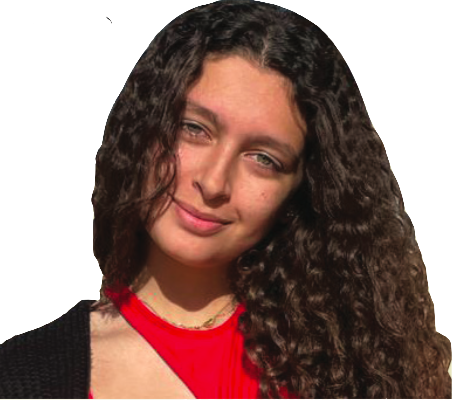 With the firm belief in the power of social media, young Egyptian woman Farida Nadir has set out to enact change, empower women, and to fight all kinds of violence against women.

With this in mind, 17-year-old Nadir came up with an inspirational Instagram page named Auset, which can be found on Instagram via the handle @auset._

Despite her young age, the Grade 12 student at Lycée Voltaire was able to express and discuss the problems and daily pressures that women face through creative posts on the social media platform. Since it was set up, the page has grown with astonishing speed, reaching a wide audience in the first two days from its launch.

Daily News Egypt sat down with Nadir for an interview, to find out more about the page and why it was set up.

Nadir used to send inspirational, cheerful, and empowering quotes to her friends by WhatsApp every evening on a daily basis, to empower them and make them happy.

Among her friends and family, she was known to be interested in women’s rights and was called a feminist. So one day, she decided to upscale her interest in feminism and turn it into a more impactful pursuit, by reaching out through Instagram.

“I have always been interested in women’s empowerment issues, and since I was young I have been listening to a lot of stories from females who face and exposed to different forms of daily pressures,” Nadir said, “I always hoped to change from being a listener to someone that takes action against those who are putting pressures and making violence against women.”

Auset aims to empower women and to shed light on the problems of gender inequality, by breaking stereotypes via every post published, giving women more freedom to talk and speak up.

Talking about the services and the goals of her page, Nadir told Daily News Egypt that Auset focuses on three pillars.

“The first pillar is to raise awareness among Egyptians on the different kinds of violence against women, and the daily pressures that women face,” according to Nadir, “The page also posts educational tips for people on all kinds of violence and pressures that women are exposed to during their daily life, whilst educating females on how to take action and speak up if they themselves are exposed to any of those, or if they speak or met with someone who has been subjected to any kind of violence.”

Nadir gave an example from her page, where she talked about the pressures of going about daily life whilst suffering the pain frequently associated with the menstrual cycle. Despite this, women are still required to finish their daily tasks even when in pain.

“The second pillar is to empower women through my posts by highlighting women’s success stories in any profession, and to encourage and empower more women to work, boost their confidence, and inspire others to work like them,” she said.

Nadir said that the third pillar is to ensure all means of support to women, by providing them whatever help that they seek. This starts from only sharing their success story or complaints, moving to connecting them with a network of different institutions, doctors, lawyers, and the like.

“In brief, my page aims to serve like a safe platform in which girls speak up and seek help, in addition to highlighting the success stories to empower and encourage more women,” she said.

Daily News Egypt was curious to know why did Nadir choose auset name for her page, Nadir said that Auset was the name of an Ancient Egyptian goddess who was so powerful that she was represented as a throne that transmits power from pharaoh to pharaoh.

Responding to DNE`s question on Nadir`s role model, she said that “My role model is my mother even before I knew what the meaning of the word was, as she inspires me to achieve my dream without any barriers

“My mother for me is considered a woman that looks at life as a challenge that she was able to seize everyday between house duties, her child duties, her work duties, and her own self,” She notes.

She proudly said that her mother has encouraged her a lot in her life, and that she has acted like her shadow in every step of her life.

Talking about the conditions of women and the challenges they face nowadays, Nadir said “I think that women have come a long way in terms of gaining their employment rights, that in some countries they have the same salaries and some equal rights as men, and that they have earned their place in society, and whereas we still have a long way to go this is good progress.”

Success behind the success

It is impressive that such a young woman who launches a page to empower women and highlight their success stories, is herself a success story of note.

Nadir was an award-winning gymnast for 14 years, and spent five years with the Egyptian National Team with whom she won two African Cups and participated in three World Cups.

Nadir added that her family was very supportive and encouraging of every step she took, whether it was her education, sports, or even her interest in women’s empowerment.

“I would love to say that I am proudly raised in a supportive, encouraging family, as every member of my small family supported and encouraged me to reach where I am now, so I would like to send them special thanks,” Nadir said, “My family is the unknown soldier as I took my journey, and they have always been there for me, no matter what.”

She added, “I will start with my grandmother, a strong woman who is there for me no matter what.”

Nadir added that it was her grandmother who used to go with her to training, to encourage and give her advice to ensure that she shot for the stars, and to push her to be the best she could be.

Nadir said that she could not deny that her grandmother really holds her interests at heart, with a love that knows no bounds.

“She is the one person that I, and everyone who knows her, go to when we are in dire need of prayers,” Nadir said, “She is, quite literally, our 24/7 access to Allah, to the extent that her prayers always come true.”

Talking about her mother, Nadir said that she got her strength and inspiration from her mother, who was able to make the balance between her career as an Editor-in-Chief at a well-known Egyptian journal, her house duties, and her own self.

“My mother is a symbol of strength, sacrifice, and unconditional love,” Nadir said, “My dad is my hero, he is always my support system when I lost hope.”

She added, “My father gave me what I would describe as the greatest gift anyone could give to another person which is that he believed in me.”

“I would say that I am also raised in a family that appreciates each other, and with a father who supports, empowers, and encourages women, whether his mother-in-law, wife, or his daughter,” Nadir said.

Nadir notes that her hopes for Auset is that it reaches as many women as possible, and to build it into a mobile application that discusses all aspects and issues of women’s empowerment. In the future, this would develop even further, to make it into a printed magazine.

For the time being, however, Nadir says that she will continue posts either on Instagram or on the application, as the fight for women’s equality and freedom continues. She added that the fight will continue, with the posts continuing, until women reach their rightful place within society.