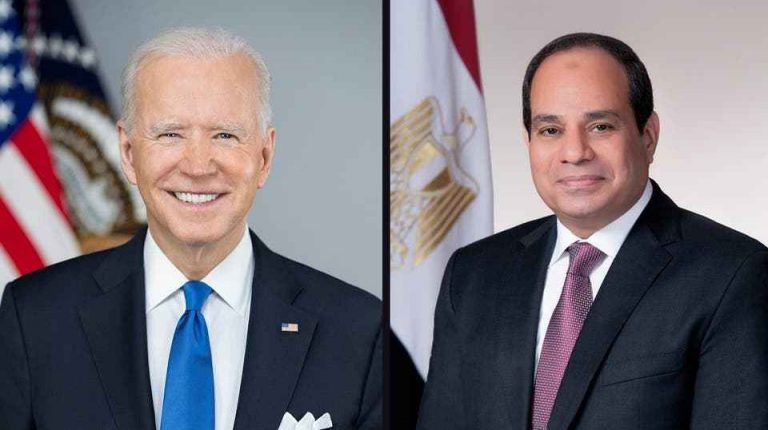 Egypt’s President Abdel Fattah Al-Sisi held a telephone call, on Monday, with his US counterpart Joe Biden to discuss various issues of mutual interest for the two countries.

During the conversation, the two leaders discussed the latest updates in the Middle East and the Grand Ethiopian Renaissance Dam (GERD) project.

Biden applauded Egypt for its successful diplomacy “to end the recent hostilities in Israel and Gaza, and ensure violence does not reoccur”.

In a post on his official Facebook account, Al-Sisi said that his US counterpart’s stance was characterised by understanding, frankness, and credibility on all issues of concern to the two countries and the region.

“I would like to confirm that President Biden has an insightful vision and distinguished experience characterised by realism in all files, including the file of bilateral relations,” the Egyptian President said, “I find that he is able with distinction with his skill and experience to create solutions to all problems and challenges surrounding the world.”

The two leaders agreed on the “urgent need to deliver humanitarian assistance to those in need in Gaza, and to support rebuilding efforts in a manner that benefits the people there and not Hamas”, according to a Monday statement from the White House.

Regarding the GERD dispute, Biden underscored his country’s interest in achieving a diplomatic resolution that meets the legitimate needs of the three countries involved, Egypt, Sudan, and Ethiopia.

The discussion also touched on the situation in Libya, supporting the upcoming national elections this December, and the removal of all foreign military and irregular forces from the country.

Moreover, Biden “underscored the importance of constructive dialogue on human rights in Egypt”, according to the White House.