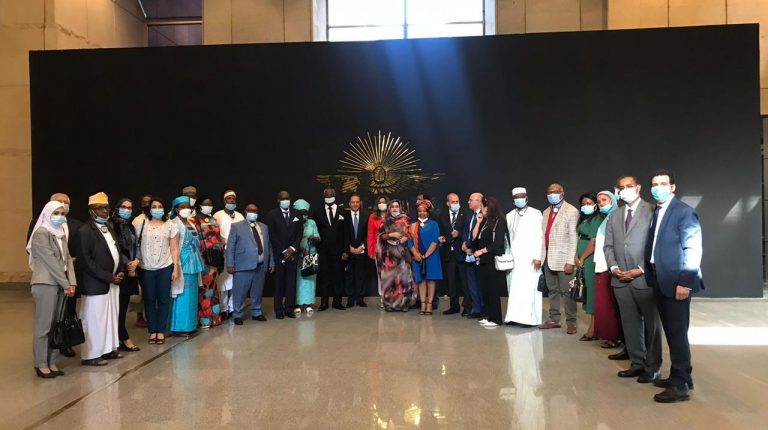 Egypt’s Ministry of Foreign Affairs has organised a tour of the National Museum of Egyptian Civilization (NMEC) in Fustat for African ambassadors.

The tour was organised in coordination with the Ministry of Tourism and Antiquities, and took place to mark Africa Day.

He asserted that Egypt is working to strengthen bilateral cooperation with African countries, as well as keep Egypt’s role in the African Union (AU) active.

The tour comes as part of President Abdel Fattah Al-Sisi’s mandates to strengthen all cooperation with other countries, including in Africa.

Egypt is continuing its work to advance these relations in a way that achieves the interests of those citizens of African countries, Loza added

Ghada Shalaby, Deputy Minister of Tourism and Antiquities, also delivered a speech in which she expressed the importance of this occasion. She noted the ministry’s keenness to celebrate museum as part of the Year of African Culture 2021.

Shalaby said that Egypt is looking to increase the number of inbound tourists from African countries due to the country’s diverse tourism, cultural, and religious opportunities.

Tourism is one of the most important features of cultural relations between Egypt and African countries, she added.

Minister of Tourism and Antiquities Khaled El-Anani has directed for citizens of African countries to be granted a 50% reduction on entry fees to archaeological sites and museums throughout Egypt.

Mahmoudou Labarang, Cameroon’s Ambassador in Egypt and Dean of the diplomatic corps in Cairo, delivered a speech on behalf of the African diplomatic corps. He congratulated Egyptian officials and African countries on the occasion, and praised the country’s political leadership that provides Africa with a special priority.

Labarang pointed out that African Ambassadors in Egypt are following with admiration the developments that are taking place in all fields in the country.

He said that the tour at the NMEC and the celebration programme reflects Egypt’s interest in the African continent and the interaction witnessed by the Egyptian role with the issues of the continent.

The visit comes as part of the Africa Day celebrations, which mark the 58th anniversary of the founding of the Organisation of African Unity (AOU) on 25 May 1963.