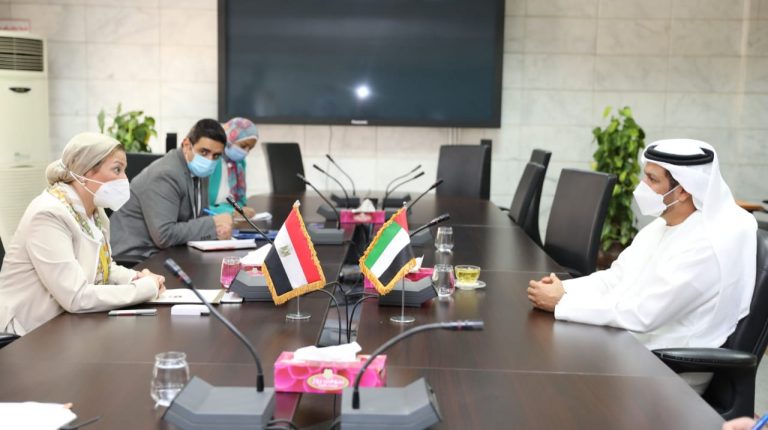 Egypt’s Minister of Environment Yasmine Fouad met, on Wednesday, with the UAE’s Ambassador to Cairo Hamad Saeed Al Shamsi to discuss cooperation between the two countries on waste management projects.

According to a ministry statement, the topics related to climate change and biological diversity were at the forefront of the discussions between the two sides.

During the meeting, Fouad welcomed the cooperation between the two countries to work towards halting the depletion of resources, and to preserve them to ensure their sustainability for future generations.

Fouad noted that the two countries are also cooperating in the field of municipal solid waste. The minister is set to visit Sharjah in the coming period, to inspect the solid waste complex belonging to the UAE environmental management company, Bee’ah.

She highlighted the close relations between the two countries at the regional and international levels in climate change negotiations.

Fouad also expressed her pleasure at receiving a delegation from the UAE to discuss common themes related to climate change negotiations, and discussions of the various impacts of climate change on all aspects of development. This particularly focused on water resources, as many countries in the region suffer from water scarcity.

For his part, Al Shamsi expressed gratitude and appreciation for Egypt’s efforts on various environmental issues. He lauded the fruitful and continuous cooperation between the two countries in many fields, including renewable energy and biological diversity.

In March, Fouad met with officials from Bee’ah, to discuss cleaning and waste management services provided by the Administrative Capital for Urban Development (ACUD) company.

During the meeting, Bee’ah officials reviewed its previous experiences in the field of waste management in the UAEm and their work plan for the ACUD. This would see cleaning work and management of the municipal waste system in the New Administrative Capital (NAC), including collecting, transporting, cleaning streets, recycling, and waste treatment.