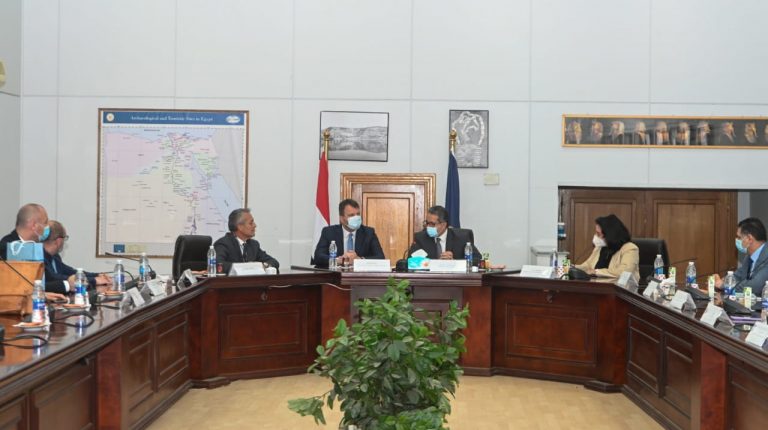 Egypt’s Minister of Tourism and Antiquities Khaled El-Anani has met with a Serbian government delegation to discuss enhancing tourism and archaeological cooperation between the two countries.

During the meeting, the two sides also discussed increasing inbound tourism to Egypt from Serbia.

The meeting was attended by: Serbia’s Ambassador in Cairo Jugoslav Vukadinovic; Ghada Shalaby, Vice Minister for Tourism Affairs; and Ahmed Youssef, CEO of the Egyptian Tourism Promotion Board (ETPB).

El-Anani said that Serbia is one of the top 20 countries sending tourists to Egypt, with the number of tourists from the country witnessing a noticeable increase.

The minister added that Serbia was one of the first countries to start sending tourists to Egypt after the resumption of inbound tourism last July. He said that this confirms Serbia’s confidence in the precautionary measures and hygiene safety regulations applied in Egypt.

He also emphasised the depth of relations between the two countries, both of whom are witnessing cooperation plans in many fields.

El-Anani reviewed the efforts made by the Egyptian Government to support the tourism sector and protect it from the repercussions of the novel coronavirus (COVID-19) pandemic. These steps were taken, he noted, to ensure the safety of workers in the country’s important tourism sector, citizens, and tourists.

He also said that Egypt is updating these procedures and regulations regularly, and has given high priority to providing COVID-19 vaccines to tourism sector workers.

The meeting also discussed a number of important issues, including the work of the joint Egyptian-Serbian committee, which will witness a broader framework for cooperation.

Mirovic expressed his country’s desire to strengthen cooperation with Egypt, especially in the fields of tourism and culture. He noted that the region of Vojvodina is considered a major cultural hub in Serbia.

With this in mind, El-Anani referred to the possibility of organising tourism and cultural events between the two countries, in cooperation with Egypt’s Ministry of Culture.

Mirovic also reviewed Egypt’s successful participation as a guest of honour last year at the Serbian Tourism Exhibition. He extended an invitation to El-Anani to visit Serbia, and participate in the next edition of the exhibition.

During the meeting, the Serbian delegation’s members said that Egypt is one of the most important tourist destinations preferred by the Serbian tourist. This is due to the country’s picturesque beaches on the Red Sea coast, with the delegation also highlighting Egypt’s vaccination of workers in the tourism sector.

EU open to use of approved COVID-19 vaccines