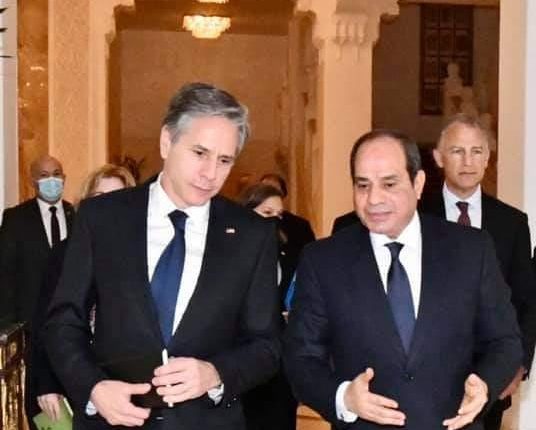 Egypt’s President Abdel Fattah Al-Sisi has highlighted the need for negotiations between the Palestinians and Israelis to resume, following the recent Israeli attacks on the Occupied Territories.

The President’s remarks came as he received US Secretary of State Anthony Blinken, on Wednesday, in the presence of Minister of Foreign Affairs Sameh Shoukry and Chief of the General Intelligence Service Abbas Kamel.

Egyptian Presidency Spokesperson Bassam Rady said that the President emphasised the long-standing strategic partnership between Egypt and the US, and its pivotal role in supporting security and stability in the Middle East.

He also expressed his aspiration to enhance coordination and consultation between the two sides on various political and security issues in the region.

For his part, Blinken noted his country’s interest in strengthening strategic relations with Egypt, as well as intensifying coordination and joint consultation on all Middle East issues. This comes in light of the effective political weight enjoyed by Egypt in the Middle East and its regional surroundings.

Rady also said that the meeting touched on developments in Palestine and ways to revive the peace process.

Blinken praised Egypt’s efforts to reach a ceasefire between the Palestinians and Israelis, and its work to stabilise the situation.

In turn, Al-Sisi also lauded the US’s full support for Egypt’s efforts, and noted that the recent developments confirm the importance of immediately working to resume direct negotiations between the Palestinians and the Israelis. This would take place with active US involvement, to bring the two sides back to the dialogue table.

The President stressed Egypt’s keenness to cooperate closely with the US in this regard, and the former’s firm stance in reaching a just, comprehensive solution guaranteeing the rights of the Palestinians.

The meeting witnessed a consensus to strengthen bilateral coordination and consultation between Egypt and the US, with regard to ensuring a ceasefire. This would also see the launch of the reconstruction process in the Gaza Strip.

The issue of combating terrorism and extremist ideology was also addressed, as Al-Sisi highlighted Egypt’s firm will to continue efforts in confronting such ideologies.

This would take place by strengthening the firm principles of citizenship, coexistence, and freedom of belief. In this regard, he noted the importance of continuing coordination and joint cooperation with the US to support these efforts.

For his part, Blinken praised the successful and decisive Egyptian efforts in this context, and the burdens it bears in combating terrorism.

He expressed the support of the current US administration, under the leadership of President Joe Biden for these efforts. He also noted that Egypt is a central partner in confronting the challenge of cross-border terrorism.

Rady noted that the meeting also witnessed discussions on a number of regional files, especially the developments in Libya and its current transition period towards elections this coming December.

Both Al-Sisi and Blinken agreed on the importance of supporting this political phase in Libya’s history, and that there is a need for mercenaries and foreign armed militias to leave the country.

This will contribute to achieving the Libyan people’s aspirations, preserve the integrity of the country’s land and national institutions, guard against chaos, and block its shift into spheres of influence for external forces.

The meeting between Al-Sisi and Blinken also touched on the issue of the Great Ethiopian Renaissance Dam (GERD), in which the President affirmed Egypt’s adherence to its rights by reaching a fair and binding legal agreement.

This agreement guarantees Egypt’s water security through clear rules for filling and operating the dam, and achieving the common interests of all parties. Al-Sisi highlighted the importance of the US influential role in resolving the crisis.

Meanwhile, Blinken reiterated the US administration’s commitment to exert efforts to reach an agreement that preserves the water and development rights of all parties.

Topics of bilateral relations between the two countries were addressed, where Blinken praised the huge development efforts that Egypt is currently witnessing.

In this context, Al-Sisi said that the state’s efforts through major projects aimed to create comprehensive development in all sectors, and improve all aspects of living standards in the country.