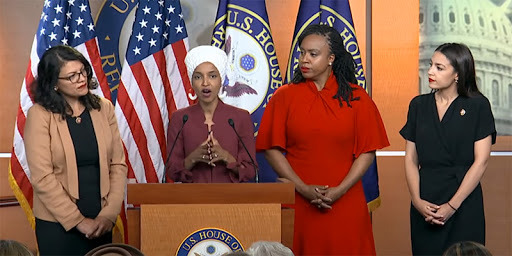 The recent war in the Gaza Strip left a harsh humanitarian situation for the Palestinians. It also showed that the current US administration’s position, like all previous administrations, is supportive of Israel in all cases.

It has, however, tried to fall behind the slogan of “quiet diplomacy”, focusing on its efforts to solve the crisis in an exaggerated way. This comes at the expense of other countries that have defended the Palestinian people for the sake of truth and humanity only, especially Egypt, which managed to stop the aggression in Palestine.

In contrast to the Biden administration’s pro-Israel stance, a large number of progressive Democrats criticised the administration’s position. They asserted that Palestine appears to be an exception to what is called Biden’s foreign policy, which is centred on human rights.

To a large extent, Biden’s stance in support of the Israeli attack put the US president in a very critical position, with progressives in his Democrat party becoming increasingly vocal in their criticism of Israel.

In fact, the Democrat Party has witnessed a remarkable ideological shift in the US over the past years, as the party split into two main blocs of centrists and progressives. This came after the percentage of members belonging to the conservative bloc in the party declined.

Progressives in Congress in both the Senate and the House of Representatives, especially in recent years, support the Palestinians, after the escalation of the positions of the right-wing Israeli governments against them.

The progressives are considered a left-wing movement within the Democrat Party, with tendencies more open and decisive than the policies of the rest of the party members, and they can be classified as being on the left of the Democrat Party.

Furthermore, currently, the Progressive Democrats are forming a bloc that is the largest within the Party and includes about 97 out of 233 Democrats in the House of Representatives.

Thus, discord within the party has become evident to everyone, because the party base expresses concern about the human rights of Palestinians. This has already been demonstrated by the adoption of a position different from that adopted by members of Congress during previous clashes in the region, when most Democrats affirmed their strong support for Israel’s right to defend itself and called for peace, without publicly criticising its actions.

This time, in a clear objection to Biden’s support for Israel and his attempt to obstruct UN Security Council resolutions, 25 members of the Democrat Party in Congress acknowledged the Israeli occupation and that what is happening in Jerusalem is systematic forced displacement, which violates international laws.

In a letter addressed to Secretary of State Anthony Blinken, lawmakers said that Israel has demolished more than 5,000 Palestinian homes in East Jerusalem over the past 50 years. Consequently, the pattern of forced displacement, the letter says, “clearly violates” international laws.

The letter also stated that “East Jerusalem is part of the West Bank, and under international law, Israel occupies this area militarily”. The initiative was led by Representatives Mary Newman and Mark Buchan, and signed by prominent progressives, including Alexandria Ocasio-Cortez, Pramela Jayapal, Ayana Presley, Ilhan Omar, and Rashida Tlaib.

Furthermore, many representatives described what is happening in Palestine today as an issue of racial justice. For example, Representative Alexandria Ocasio-Cortez from New York accused Israel of committing grave human rights violations against the Palestinians, and establishing an “apartheid state”.

Also, Rep Ayanna Presley, a black woman from Massachusetts, made a clear comparison between what is happening in Palestine and the racism in America.  She said, “I have experienced police brutality and state-sanctioned violence.”

This is in addition to Rep Mark Buchan, from Wisconsin, who also told Biden’s chief adviser that, “We will defend peace in a way they may not have heard of before.”

This group also called for the cessation of arms sales to Israel during the crisis, affirming that the US should not send weapons to the Israeli Prime Minister, Benjamin Netanyahu, that would help him prolong the violence. Although the chances of success of this initiative are very slim, it illustrates the extent of the disagreement within the party regarding the Israeli-Palestinian conflict.

This transformation within the Democrat Party is truly new hope for the Palestinian cause. Only a few years ago, it was very difficult, even impossible, to criticise US policies towards Israel, and in return, the attack on Arabs and Muslims was completely acceptable.

As a matter of fact, the Afro-American struggle against racism in the US played an important role in bringing about this positive transformation in favour of the Palestinian cause within the American community, and even within the American Congress.

Anti-racist movements, such as the “Black Lives Matters” movement, clarified the nature of the ongoing conflict in the Middle East by adopting the Palestinian cause as one of the main issues in their struggle. It revealed many of the tricks that the Israelis used to do to create an apartheid state in Palestine and even to exterminate the Palestinians.

These movements made Democrat and liberal voters more aware of concepts such as fairness, equity, and systemic discrimination. It came as their demands for more liberal political positions on immigration, police, and armed violence at home over the past decade have reshaped the way that many in the US view the conflict in the Middle East.

Today, the issue of the Israeli occupation of Palestine and the genocide of these people has become clear to Western society. There is no longer any room for changing facts, supporting Israel, or even adopting double standards towards human rights.