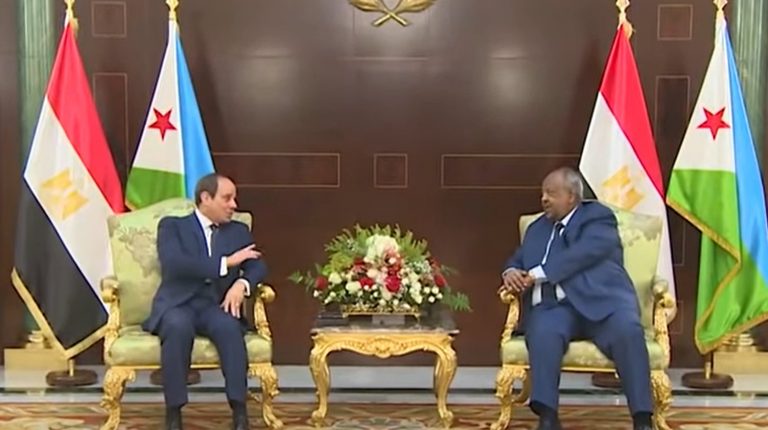 This is the first official visit by an Egyptian President to Djibouti since its independence in 1977, with Al-Sisi received by Guelleh in addition to a large number of senior officials.

Al-Sisi and Guelleh agreed that the Ethiopian dam should be filled and operated according to “a fair and binding legal agreement” that could maintain regional stability and preserve the interests of all parties, the Egyptian Presidency said in a statement.

The two leaders also stressed the need for counterterrorism partnership in the Horn of Africa and underscored their cooperation over security issues in the Red Sea and the Bab el-Mandeb Strait.

Al-Sisi said that the two sides agreed to establish an Egyptian logistical zone in Djibouti and on increasing Egyptian investments into the country.

Furthermore, Egypt will build a hospital in Djibouti and will establish the first branch of Banque Misr in the Horn of Africa country.

An official reception ceremony was held for Al-Sisi, during which the national anthems of the two countries were played.

Egyptian Presidency Spokesperson Bassam Rady said, “President Al-Sisi’s historic visit to Djibouti, which is the first of its kind, will witness the holding of an Egyptian-Djiboutian summit to discuss various files related to joint cooperation and ways to strengthen bilateral relations.”

Al-Sisi and Guelleh discussثي fostering relations at the security, military, and economic levels, to achieve the interests of the two countries.

The Egyptian-Djiboutian summit discussed and exchange views on the most important developments regarding regional issues of common interest.