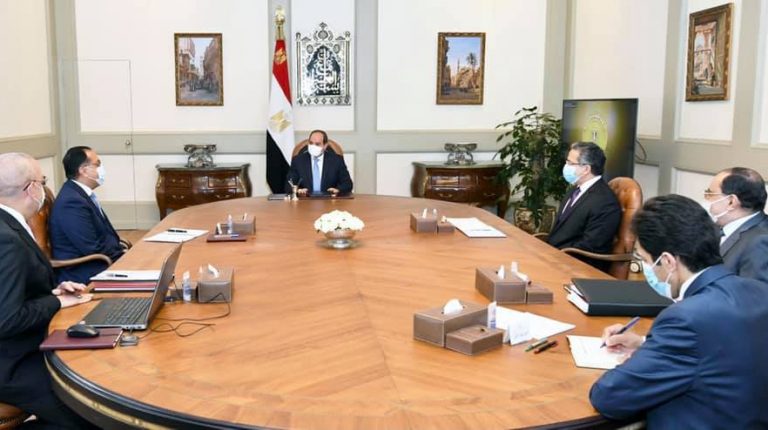 Egypt’s President Abdel Fattah Al-Sisi held a meeting, on Saturday, to follow up on the progress of various tourism development projects across the country, according to a statement from Presidency Spokesperson Bassam Rady.

Also present at the meeting was Major General Amir Sayed Ahmed, Adviser to the President for Urban Planning.

During the meeting, the President was briefed on the executive position of a number of current and future projects related to tourism development. These projects include real estate and hotel resorts, as well as various tourism activities nationwide, especially on the Red and Mediterranean coasts.

The meeting addressed the operational targets that have been achieved from these projects and their developmental, economic, and tourism impact, with an examination of all challenges in this context.

Moreover, Al-Sisi directed for the optimum utilisation of the state’s assets and the preservation of their value as a national wealth. This would take place by reviewing the rates of implementation and operation of tourism projects that have not yet been completed, to achieve these projects’ targeted development and economic goals.

The efforts to resume tourism movement in Egypt, including rates of trips and foreign tourists during the last period in the governorates of South Sinai and the Red Sea, were also reviewed during the meeting.

During the past few months, the rates of tourism movement reached good rates compared to the global rates affected by the novel coronavirus (COVID-19) pandemic.

The meeting also touched on the latest developments in tourism sector activities, and the opening of a series of museums nationwide. Other reviews included the executive steps for the Grand Egyptian Museum (GEM) in Giza, and the Rams Road development project in Luxor.

Financial position of banks in Egypt increases to EGP 7.55trn in March 2021: CBE