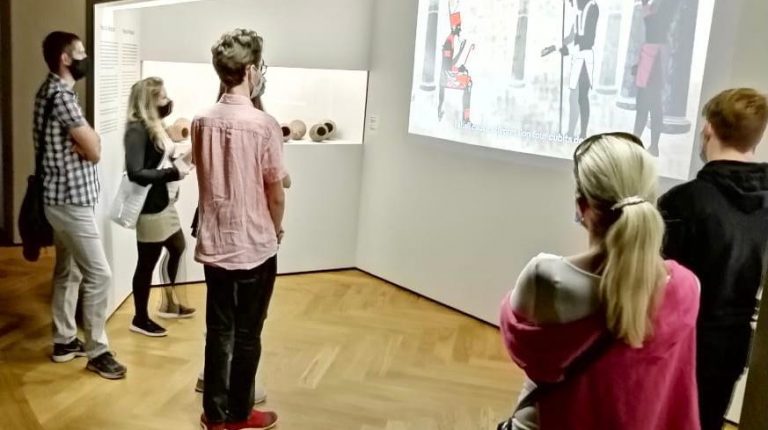 Tickets for the “Kings of the Sun” exhibition in the Czech capital, Prague have been sold out until 6 June, according to Egypt’s Ministry of Tourism and Antiquities.

The exhibition, which features treasures from the Ancient Egyptian period, was reopened in May, after a short hiatus in the wake of the novel coronavirus (COVID-19) pandemic.

The exhibition was inaugurated by Minister of Tourism and Antiquities Khaled El-Anani and the Czech Republic’s Prime Minister Andrej Babiš in August 2020.

Mostafa Waziri, Secretary-General of the Supreme Council of Antiquities, said that the exhibition is witnessing a significant turnout, as the number of visitors since its reopening on 4 May has reached nearly 10,000.

Ibrahim Mostafa, the archaeologist accompanying the exhibition, said that around 400 people visit the exhibition every day, divided into six groups. The duration of the visit made by each group is about 105 minutes. He added that all hygiene safety regulations are implemented during the visits.

The exhibition opened in conjunction with the celebration to mark the 60th anniversary of the archaeological work undertaken by the Czech mission in Abusir, located near Cairo.

It gives visitors from the Czech Republic and Europe a small glimpse of the Ancient Egyptian civilisation. It also encourages them to visit Egypt to see more of its antiquities, and enjoy its picturesque beaches and beautiful landscapes.

The exhibition includes 90 artefacts from the Czech mission’s excavations in the archaeological area of ​​Abusir, including the head of a statue of King Ra-Nefer-Ef. There are also a number of statues from the Old Kingdom, including a statue of a scribe, statues of senior statesmen and employees, a group of canopic jars, in addition to 10 faience ushabti figurines.

Topics: Kings of the Sun Prague