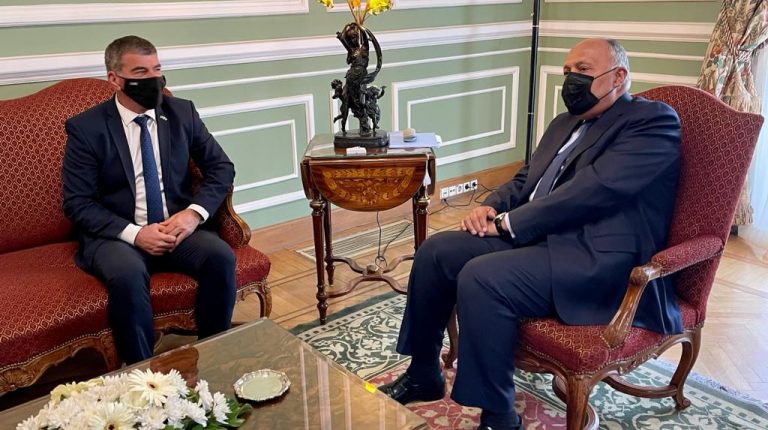 Egypt’s Minister of Foreign Affairs Sameh Shoukry has highlighted that a two-state solution is the only way to achieve lasting Middle East peace, as he met his Israeli counterpart Gabi Ashkenazi, on Sunday.

Ahmed Hafez, Spokesperson for Egypt’s Ministry of Foreign Affairs, said that Ashkenazi’s visit to Cairo comes as part of Egypt’s communication with the Palestinians and Israelis to establish a ceasefire between the two sides.

During the meeting, Shoukry stressed the need to build on the ceasefire by stopping all practices that lead to tension and confrontations, especially in the Palestinian territories, Hafez said.

The minister noted the need to take into account the special sensitivity associated with East Jerusalem, the Al-Aqsa Mosque, and all Islamic and Christian holy sites in the Palestinian territories.

He also expressed the importance of taking further measures, in the coming period, aimed at providing the necessary conditions to create a favourable atmosphere to revive the desired political path.

This would also ensure the launch of serious and constructive negotiations between the two sides, while refraining from any measures that hinder the efforts made in this regard.

Shoukry reiterated Egypt’s firm position that reaching a two-state solution is the only way to achieve the just and lasting peace, security, and stability sought in the region.

The minister emphasised the right of the Palestinian people to self-determination, through the establishment of an independent state according to 1967 borders, and with East Jerusalem as its capital.

He indicated that Cairo will continue its endeavours and contacts with all concerned parties in an effort to achieve this goal.

The two ministers also discussed ways to facilitate the urgent reconstruction of the Gaza Strip during the coming stage. They agreed to continue consultations between the two countries and the Palestinian Authority (PA), to discuss how to halt the current stalemate.