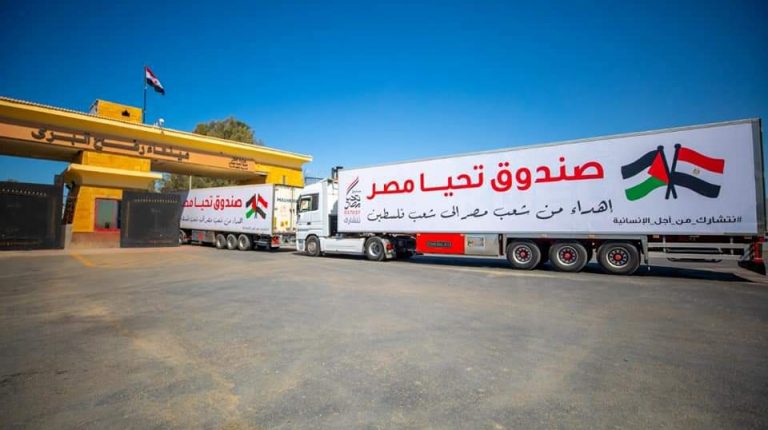 The third Egyptian humanitarian convoy has arrived in Gaza, boasting 20 containers loaded with over 500 tonnes of food and humanitarian aid for the Palestinians.

The convoy, which carried vegetables, fruits, canned goods, and electrical appliances, is the third convoy sent to the Gaza Strip by the Tahya Misr Fund, as part of the presidential initiative for the region’s reconstruction.

The fund prepared the convoy through contributions and donations made by Egyptian companies operating in various commercial and industrial fields.

The fund announced that it was opening a special account in all Egyptian banks to receive contributions to reconstruct Gaza from both inside Egypt and abroad. This came in addition to its preparations to launch a humanitarian aid convoy for Palestinians.

It is worth noting that the fund acts as an assistant to Egypt’s state agencies, working as an umbrella for community work to support the most vulnerable families in the neediest areas nationwide.

The aid was delivered to the Palestinian people under the slogan “We share for the sake of humanity”. The motto was chosen to “encourage all social work parties around the world to compete, and exert more effort to achieve record numbers in charity and solidarity”, the Egyptian cabinet said.

Following the Israeli air strikes against Gaza, which lasted for 11 days, Egypt launched an initiative for the reconstruction of Gaza on 18 May, allocating $500m to the process.

The third convoy comes 10 days after an Egypt-brokered ceasefire took effect to stop Israeli aggression on the Gaza Strip.