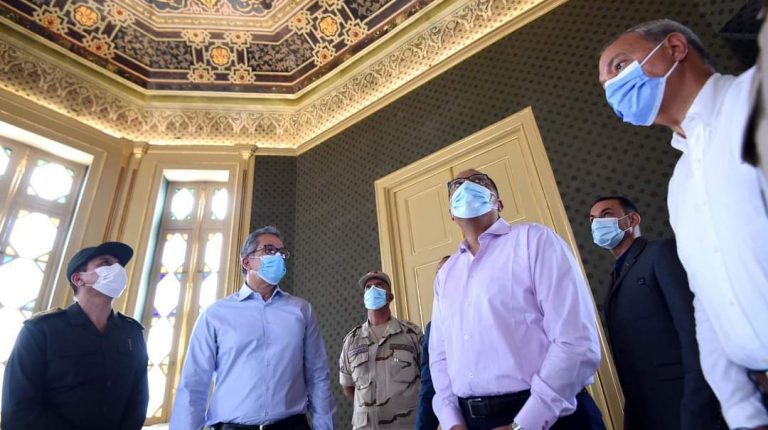 Egypt’s Prime Minister Mostafa Madbouly asserted, on Monday, that there are presidential directives to raise the efficiency of archaeological sites across the country.

These directives aim to put these sites back on the list of tourist and historical attractions as soon as possible.

Madbouly’s remarks came during his tour to review and follow up on the restoration and development of the Mohammed Ali Palace in Shubra Al-Khaimah. He reviewed the Ministry of Tourism and Antiquities’ efforts to complete the restoration work in preparation for the palace’s opening.

The Mohamed Ali Palace is unique in that it was built using the first modern lighting system, which was first introduced to England in 1820 by engineer M. Galloway. He was soon called on by Mohammed Ali to fix the necessary preparations in his palace, which was considered a great qualitative change.

The palace was unique in combining the European style in decorations and the spirit of Islamic architecture planning, featuring four ceilings enclosed with a large fountain standing as if it were the yard of a mosque.

However, the drawings and decorations were painted in the 19th Century’s preferred Italian and French styles. It embraces a host of paintings of Mohammed Ali himself and his family members.

Minister of Tourism and Antiquities Khaled El-Anani, who was also present at the tour, indicated that the restoration of the Gabalaya kiosk building has been completed

He added that the palace will be linked to a Nile Marina to transport tourists, with about 60% of the construction work on the marina and pedestrian bridge already completed.

Last Saturday, El-Anani announced that the project to restore the Mohamed Ali Palace in Shubra will be completed this summer, in preparation for its opening by the end of 2021.

Meanwhile, Madbouly also inspected the palace’s rooms, including the throne and food rooms. He directed for paint work to be carried out on the buildings surrounding the palace to give it an aesthetic appearance, in addition to constructing a tree fence around the pergola located in this area.

He also ordered for the development of all dilapidated buildings within the palace area, and raising the efficiency of all roads surrounding the palace.

Meanwhile, the Armed Forces Engineering Authority supervising the project explained that it is undertaking the work on raising the efficiency of the Mohammed Ali Palace. This is according to the cooperation protocol to restore eight archaeological sites, signed between the authority and the Ministry of Tourism and Antiquities.

These include the Greco-Roman Museum and Eliyahu Hanavi Synagogue in Alexandria, and the National Museum of Egyptian Civilization (NMEC) and Baron Empain Palace in Cairo.