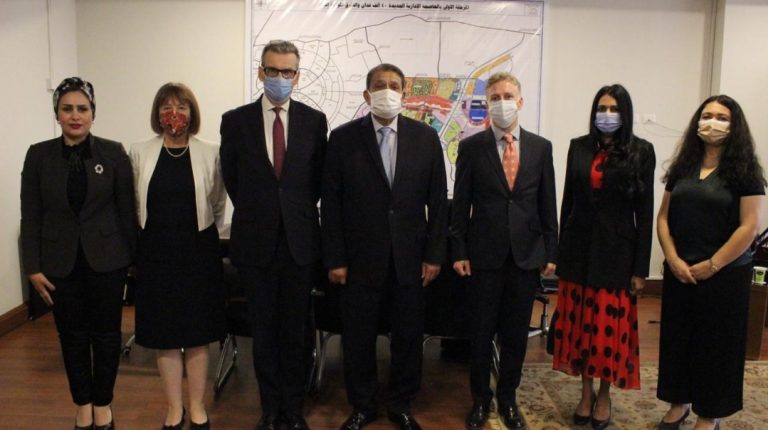 The British Ambassador to Egypt Sir Geoffrey Adams visited the New Administrative Capital (NAC), on Monday, accompanied by Director of the British Council Elizabeth White and a large embassy delegation.

The delegation toured some of the most significant developments, with a particular focus on sustainability, renewable energy, and higher education.

These included the capital’s Green River, the Government District along with the PV solar panel system covering its rooftops, the new monorail, and the branch campuses of the British universities, Coventry University and the University of Hertfordshire.

The ambassador saw the positive progress on the installation of the solar panels, which are being installed on the rooves of ministerial buildings. The project is being completed in cooperation with the UN Development Programme (UNDP).

Ahmed Abdeen, Chairperson of the Administrative Capital for Urban Development (ACUD), greeted the Ambassador at the ACUD office, where they discussed the UK’s business contribution to the NAC’s development.

This includes the opening of the two UK branch universities in 2019, and the UK’s substantial investment in the $4.6bn deal to construct the new monorail. The latter is set to connect Cairo with the NAC, and provide clean transportation for Egyptian citizens.

At the university campuses, the ambassador was welcomed by two large delegations, one from Coventry including the CEO of El Sewedy Education Ihab Salama, and President of The Knowledge Hub Universities, Dr Mahmoud Allam. The second delegation represented the University of Hertfordshire, and included President Dr Vincent Emery.

Adams was able to see first-hand the state-of-the-art technology on display, including innovative labs and advanced technologies used by students in the fields of robotics and engineering at Coventry University. He also had the opportunity to review the facilities for students studying pharmacy at the University of Hertfordshire.

“I was delighted to bring a large delegation, representing departments across the Embassy, to visit the NAC,” the ambassador said, “Our visit had two themes: sustainability and higher education. On sustainability, I was particularly struck by the solar panels covering the entirety of the city.”

Adams noted that this is a really encouraging sign of the importance the Egyptian Government is placing on green energy. It is also a particularly important subject this year, as the UK and Egypt work together on ambitious climate targets ahead of COP26, the major UN conference on climate change which the UK will be hosting in November.

“On higher education, I was delighted to see the fantastic progress made by the two British universities established in the NAC, Hertfordshire and Coventry, since my last visit,” he said, adding, “Education is at the heart of the relationship between the UK and Egypt, and we are determined to expand that partnership further, whether by encouraging new branch campuses, by offering scholarships and dual degrees, or by supporting capacity building in Egyptian educational organisations.”

Dr Mahmoud Allam, President of The Knowledge Hub Universities, which hosts Coventry University in the NAC, said, “We were honoured by the visit of H.E Sir Geoffrey Adams, UK Ambassador to Egypt and the high level UK delegation.”

He added, “We are expanding our collaboration with Coventry University by adding new programmes every year, and we are looking forward to develop more partnerships with other esteemed UK universities to bring high quality UK education to students in Egypt and the region.”

Emery added, “It is a great honour to welcome the British Ambassador to Egypt to the University of Hertfordshire hosted by Global Academic Foundation in the New Administrative Capital.”

He noted that the ambassador’s visit allows him the opportunity to see “the fantastic progress we have made on our campus to provide a vibrant learning environment with state-of-the-art facilities”.

Emery also said that these facilities will power the university’s students to reach their full potential and prepare them to contribute to the world of tomorrow.