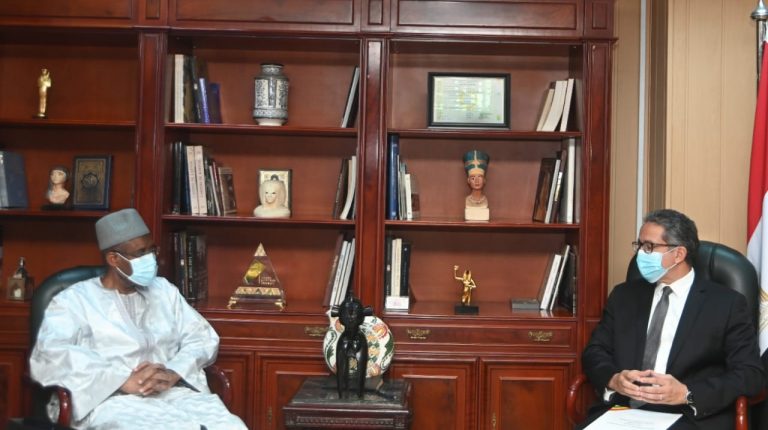 Egypt’s Minister of Tourism and Antiquities Khaled El-Anani met with Guinea’s Ambassador to Cairo Soriba Camara, on Sunday, to discuss cooperation between the two countries in the fields of tourism and antiquities.

During the meeting, the two sides also discussed Egypt’s broad expertise in tourism.

Camara congratulated El-Anani on the success of the Pharaohs’ Golden Parade, describing it as a unique event. He also praised the tour of the National Museum of Egyptian Civilisation (NMEC), organised by the ministry for African ambassadors and their families last week. The tour took place in cooperation with Egypt’s Ministry of Foreign Affairs and served to mark the occasion of Africa Day.

During the meeting, the Ambassador presented El-Anani with the mask of “Nimba” on behalf of the Minister of Foreign Affairs of Guinea, and the people of Guinea.

El-Anani asked the Ambassador to extend an invitation, on his behalf, to Guinea’s Minister of Tourism to visit Egypt soon to talk about ways of cooperation to strengthen bilateral relations in tourism.

He asked the Ambassador to thank the Minister of Foreign Affairs and the people of Guinea for the gift, and praised the depth of relations between the two countries.