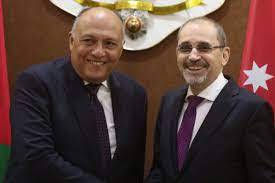 Egypt’s Minister of Foreign Affairs Sameh Shoukry held a telephone call with his Jordanian counterpart and Deputy Prime Minister Ayman Safadi, during which they touched upon intensive diplomatic moves that Egypt is undertaking in the Gaza Strip.

The two ministers also discussed the ideas presented regarding the reconstruction process in the Gaza Strip following the recent Israeli offensive in the area.

Ahmed Hafez, Spokesperson for Egypt’s Ministry of Foreign Affairs, stated that the two ministers agreed to continue communication between the two countries in this regard, in coordination with the Palestinian National Authority (PNA).

The two ministers also stressed the importance of continuing the two countries’ efforts aimed at supporting the PNA. This is also aimed at improving the living conditions of Palestinian citizens in the West Bank and Gaza Strip, in cooperation with international partners.

They addressed the importance of having a political path that allows the resumption of the negotiation process, in accordance with the relevant international decisions, and on the basis of a two-state solution.

This would lead to the establishment of an independent Palestinian state on 1967 borders, with East Jerusalem as its capital.

The discussion also touched on the bilateral relations between the two countries, as the two ministers emphasised their strategic character. This is consistent with the directives of the Egyptian and Jordanian leaderships in this regard, especially in light of the regional challenges facing the two countries.