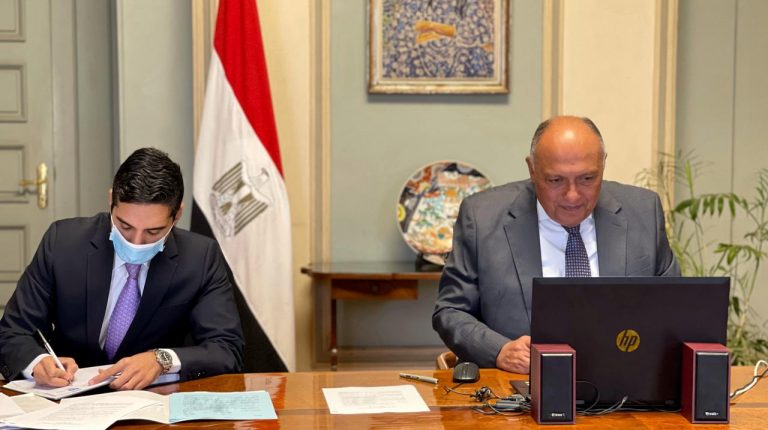 Egypt’s Minister of Foreign Affairs Sameh Shoukry has held a video conference with his Malaysian counterpart, Hishamuddin Hussain, to exchange views on ways to strengthen cooperation relations between the two countries.

During the meeting, the two sides also addressed the most important issues of common concern at the regional and international levels.

Ahmed Hafez, Spokesperson for Egypt’s Ministry of Foreign Affairs, stated that the two ministers affirmed their eagerness to strengthen the bonds of cooperation between the two countries.

They agreed to take more measures to achieve a shift in priority areas, especially on the economic level, in a way that meets the aspirations of the two friendly sides and peoples, Hafez added.

The two sides also discussed developments related to the novel coronavirus (COVID-19) pandemic, and ways to enhance national capacities and international efforts to respond to its repercussions were also discussed.

Hafez added that the meeting also touched on developments in the Palestinian issue, and efforts to achieve peace in the Middle East.

Shoukry referred to Egypt’s moves to stop the escalation and achieve the desired calm in the Gaza Strip, as well as the current efforts to build on the ceasefire between the two sides.

This comes in addition to the efforts made to urgently re-launch the path of negotiations, leading to the establishment of an independent Palestinian state according to 1967 borders, with East Jerusalem as its capital.

Views on regional and international issues of common concern were also exchanged.

Hafez noted that the two ministers expressed their aspiration for continued communication and exchange of visits during the next period.