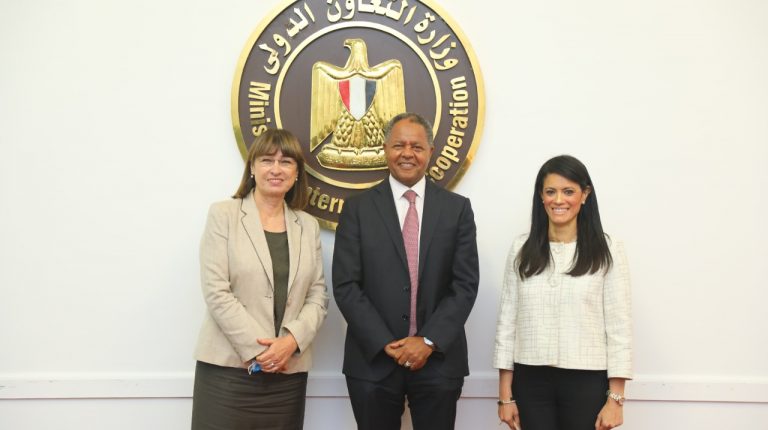 Egypt’s Minister of International Cooperation Rania Al-Mashat has thanked Menghestab Haile, Country Director and Representative of the World Food Program (WFP) in Egypt, for his extensive efforts in enhancing cooperation during his tenure in Egypt.

Haile’s tenure is coming to an end, and he will go onto assume anew position as the Country Director of the WFP in South Africa.

Minister Al-Mashat’s remarks came during the annual meeting of the Steering Committee for the UN Partnership Development Framework (UNPDF) between Egypt and the UN. During the meeting, she also applauded the efforts exerted by the WFP, one the UN’s agencies in Egypt.

The agency is working on developing the agricultural and rural sectors in Egypt through an extensive rural development program that has intervened in 63 villages across fivegovernorates in its first phase of completion.

In February 2021, the Ministry of International Cooperation held a meeting with the WFP, with the participation of the Ministries of Agriculture and Land Reclamation, and Social Solidarity. The meeting aimed to discuss proposals of expanding the scope of the program, to complement and support the “Decent Life” Presidential initiative for rural development.

In 2020, the Ministry of International Cooperation launched a thematic film “Beyond Food”, shedding light on the WFP’s activities in Egypt.

The film showed the sustainable efforts done to ensure community development, food security, and women empowerment and inclusion in the entrepreneurial scene,pushing towards the UN’s Sustainable Development Goals (SDGs).

The film was showcased during the UN General Assembly Week in New York, celebrating the organisation’s 75th Anniversary.

Last year, the WFP won a Nobel Peace Prize award for its efforts in consolidating peace, security and stability in societies by eradicating poverty and hunger from the world.

The WFP is a UN agency focused on implementing projects in Egypt in partnership with the Ministry of International Cooperation and other government entities, through the UNPDF for 2018-2022.

The Ministry of International Cooperation’s ongoing cooperation portfolio with the WFP amounts to $586m, focusing on the rural and agricultural development in Upper Egypt in order to achieve the local and global sustainability targets.