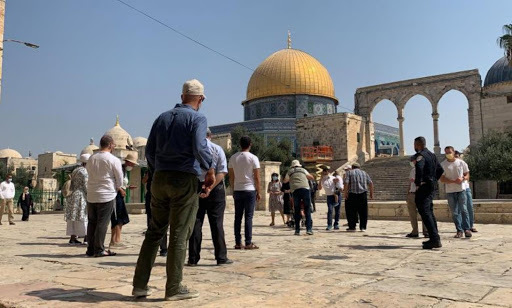 The Islamic Endowment Department in Jerusalem said, in a brief statement, that 61 settlers this morning stormed the complex, which is being guarded by Israeli police. It is expected that more settlers will enter the building later in the day.

Eyewitnesses told Turkey’s Anadolu Agency that the incursions included provocations against Muslim worshipers, with the settlers trying to perform Talmudic rituals at the site.

Settlers have been seen storming the complex every day, except for the weekend, Friday for Muslims, and Saturday for Israelis.

Israeli police began allowing the settler incursions in 2003, despite repeated condemnations by the Islamic Endowment Department in Jerusalem.

Israel occupied East Jerusalem, where Al-Aqsa is located, during the 1967 Arab-Israeli War, and annexed the entire city in 1980 in a move never recognised by the international community.

Also on Wednesday, Israeli security forces arrested 19 Palestinian citizens in the West Bank after a raid and search operation, including the leader of Hamas movement Jamal Al-Taweel. Other raids took place in Bethlehem and Hebron.

In Tel Aviv, Israel’s embattled Prime Minister Benjamin Netanyahu’s opponents were racing against the clock on Wednesday to finalise a coalition government.

Former television presenter Yair Lapid, a secular centrist, was tasked by Israel’s President Reuven Rivlin to form a government. If Lapid, however, misses the deadline, Israel is likely to go into its fifth election in just over two years, giving Netanyahu another chance to hold onto his position.

On Sunday, Lapid won the crucial support of hardliner religious nationalist Naftali Bennett, with the two reportedly agreeing to serve as rotating prime ministers as part of a power-sharing agreement. The duo has to reach a 61-seat majority in the 120-seat Israeli parliament, the Knesset.

Lapid’s Yesh Atid Party and Minister of Defence Benny Gantz’s centrist Blue and White Party said, in a joint statement, that they had “agreed on the outlines of the government and core issues relating to the strengthening of democracy and Israeli society”.

Gantz would remain in the Minister of Defence role in the new cabinet, the parties said.

According to Israeli media reports, there were some disagreements over lower-level political appointments, but Lapid was poised to announce an agreement on Wednesday.

To unseat Netanyahu and command a combined majority, Lapid must sign individual agreements with seven parties, whose members would then vote in the Knesset to confirm the coalition.

Lapid said on Monday that obstacles remained to form the coalition, but added, “That’s our first test, to see if we can find smart compromises in the coming days to achieve the greater goal.”

Meanwhile, the Islamic conservative Raam party has signalled its openness to any deal that improves living conditions for Israel’s 20% Arab minority of Palestinian descent.

The Raam party was not aiming for Cabinet positions, but rather a chair on parliamentary committees and budgets for Arab communities, according to a political analyst quoted by AFP news agency.

Netanyahu’s Likud party won the most seats in the 23 March elections, but he has failed to form a majority with his traditional allies when a far-right party backing him refused to join forces with a small Arab party.

He has also been battling corruption charges, including bribery and breaching public trust.

The possibility of unseating Netanyahu also comes after a flare-up of fighting between Israel and Palestinian militants in the Gaza Strip.

Israel’s parliament, on Wednesday, also selected a new president, Isaac Herzog, the secular son of Chaim Herzog, who served as the president of Israel from 1983 to 1993.

Herzog is set to take over the highly ceremonial role on 9 July. Should Wednesday’s efforts to form a coalition fail, he could face a busy first few weeks in office.