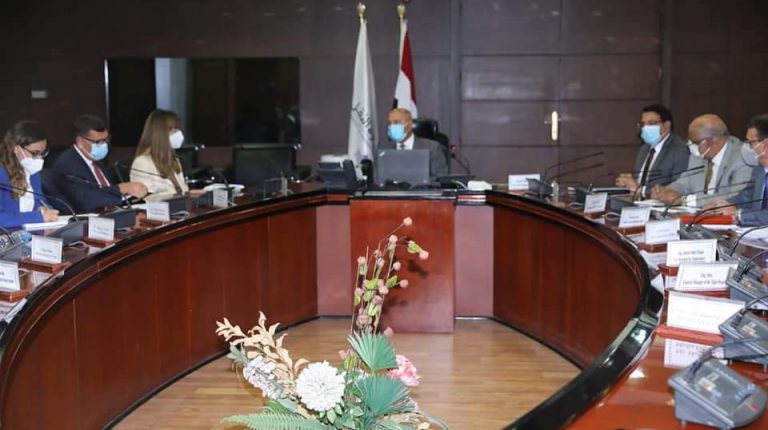 Egypt’s Minister of Transportation Kamel El-Wazir has met with a delegation from the European Bank for Reconstruction and Development (EBRD) to discuss the executive position of joint projects.

The EBRD delegation was headed by Heike Harmgart, Executive Director of the Southern and Eastern Mediterranean Region, with the participation of the Infrastructure Officer in the Middle East and Africa, and a number of EBRD members.

The meeting also sought to discuss future cooperation in the fields of railways, subways, maritime transport, and land and dry ports.

This includes the development of the Abu Qir train and its transformation into a metro station, at a total cost of €1.5bn, of which the EBRD has contributed €250m. A contract was undertaken with the Systra Group to prepare the study and design, as well as the offering and qualification documents for nine consortiums.

Egyptian-EBRD cooperation on the rehabilitation of the second metro line project, which the bank will contribute to financing, was also reviewed. The total cost of the project is €480m, of which the bank has contributed €240m. Feasibility studies are being carried out through a grant provided by the European Investment Bank (EIB), to an amount of €1.2m.

Regarding Egypt’s land and dry ports, the executive position of the 100-feddan 6 October dry port project, which is currently being implemented and established by an Egyptian and foreign private sector alliance, was reviewed.

El-Wazir confirmed that the construction of a railway link linking the dry port and the Alexandria seaport was discussed. The latest developments related to the dry port project in 10th of Ramadan City were also discussed.

The minister stressed the importance of this project, pointing out that a railway link will be established between Rubiki, 10th of Ramadan City, and Belbeis to link them through a railway network.

Work is being discussed with the EBRD in terms of financing and working with Egyptian and international private sector companies, so that the project’s implementation will begin as soon as the technical and financing studies are completed.

The two sides also reviewed the latest developments related to the project to supply 100 new railway locomotives at a value of €290m to support Egypt’s railway system. It was confirmed that the project is currently in the stage of evaluating the technical/financial offers.

El-Wazir stressed that there is great interest in the private sector’s participation in Ministry of Transportation projects, and reviewing a number of models. These include contracting with French public transport provider, RATP, to manage the Cairo Metro’s Line 3 and the light electric train (LRT).

Other projects include the management of Egypt’s monorail projects, the express electric train, and multi-purpose stations in Egyptian ports, which will be entrusted to international private sector companies.

For its part, the EBRD delegation expressed great interest in cooperating with the Ministry of Transportation in the field of green sustainable transport.