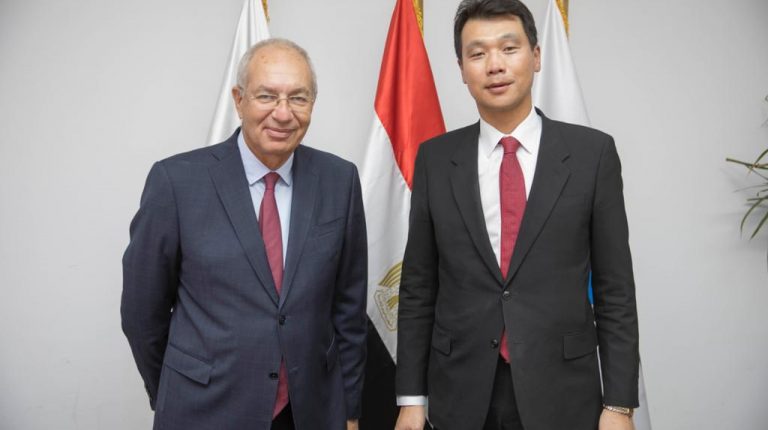 Yehia Zaki, Chairperson of the Suez Canal Economic Zone (SCZone), met with South Korea’s Ambassador in Cairo Hong Jin-wook, on Wednesday, to discuss the investment opportunities for Korean companies in the SCZone.

During the meeting, the Ambassador was briefed on the current developments, and Korean companies’ investments, in the SCZone, whilst exchanging views with Zaki on the possible means of expanding cooperation.

Zaki presented the investment opportunities in the SCZone, especially the achievements realised on the zone’s infrastructure and facilities, as well as the incentives offered to investors.

He expressed his hope that Korean companies make use of these advantages, and advance their presence in the Egyptian market.

The ambassador added that, in line with the Egyptian Government’s endeavours to increase local manufacturing, Hyundai Rotem had signed a Memorandum of Understanding (MoU) with Egypt’s National Railway Industry Company (NRIC).

This would see the local manufacture of metro cars, alongside the potential to establish a factory in East Port Said, within the boundaries of the SCZone.

Hong requested the SCZone’s continuous support for Korean companies operating in Egypt, which currently stand at around 170, including Hyundai Rotem. He pointed out that Korea has designated Egypt as an official development assistance (ODA) priority country for five years, which would allow broader cooperation between the two countries.

Zaki applauded the active presence of Korean companies in the Egyptian market, and expressed his willingness to offer support for them. He also noted that he is looking forward to the establishment of the Korean Industrial Zone in Egypt.

Both sides agreed to continue regular consultations to open up new prospects for the bilateral cooperation, and provide more opportunities for Korean companies in the SCZone.