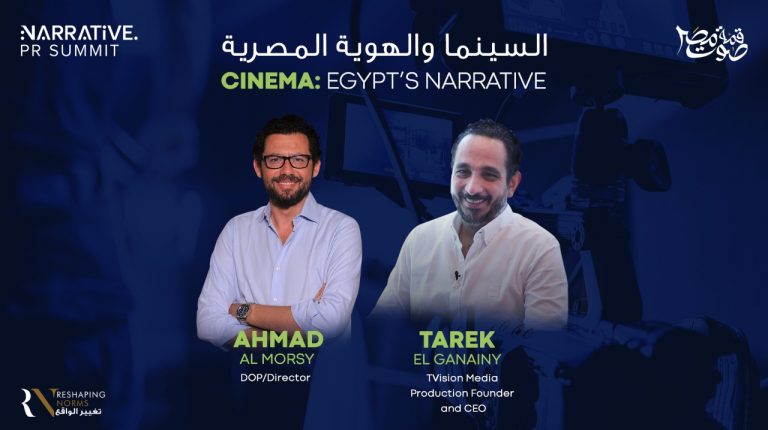 Narrative Summit delved into the world of cinema and TV in its latest Reshaping Norms episode titled “The Film Industry and the Egyptian Identity”. Cinematographer Ahmad Al Morsy and Producer Tariq Al-Ganainy, founder and CEO of TVISION Media Production, share their thoughts on the latest developments in the industry scene, including the entry of digital on-demand platforms, the future of cinema and television in the new reality, and the impact the covid-19 crisis had on the industry.
Cinematographer Ahmad Al Morsy says that the cinema and general media industry have developed greatly in the past period, evident by the cinematography that has seen dramatic development over the last 15-20 years. “This unprecedented development gave rise to the digital on-demand platforms. The new medium spread very quickly amongst the public, after providing them with a much larger diversity to match every individual taste,” he added. “The competition, which is no longer limited to cinema and TV, will undoubtedly be beneficial for the public, where the development of digital technology has added a very good opportunity for ambitious young people to produce high-quality cinematic works through mobile phones and digital cameras.”
Al Morsy also talked about his role in the Royal Mummies Parade, expressing his happiness and pride to have taken a part in the event that dazzled the world. He highlighted good preparation, planning, and determination on presenting something new, honourable, and different as the three main reasons behind the success of the event. “Excellence requires ambition and enthusiasm combined with continuous learning,” he stressed.
For his part, Producer Tariq Al-Ganainy, founder and CEO of TVISION Media Production, said that digital platforms have become not just the reality but rather the global trend, where the majority of advertisement campaigns are now directed to the content available on digital platforms in the USA and Europe. “What this means is that within no more than five years, television will feature nothing but talk shows, sports events, and news, amid complete digital platforms’ domination over cinema and tv works,” he said. “Since 70% of the population of the Arab world is under the age of 25, they make up the largest segment of users, forcing platforms to provide them with the appropriate content in terms of rhythm and quality. And as more older users turn to digital, the content will be modified to provide works more suitable for this age group,” he added.
On the extent of the impact of covid-19 on drama in Egypt, Al-Ganainy said that the pandemic has changed the topics tackled by TV to be more compatible with the taste and requirement of users in these times. For example, he added, in Ramadan last year, comedies did not meet the same appreciation they usually receive due to citizens suffering the covid-19 impact on the health and psychological level. “Therefore, this year, there were almost no comedies during Ramadan because the content makers felt that the public will not accept watching a comedy while in crisis,” he said.
Al-Ganainy, however, noted that the return of cinema will be very strong as moviegoers have been hungry for the experience after a long period of absence. “Optimists, myself among them, believe that life will return to normal in the summer. This is why I am currently working on three new films already,” he said.
This episode from the Narrative Summit – Reshaping Norms 2021 is part of the online series that launched last year on social media. The summit gives the stage for experts and specialists in various issues to present their success stories and thought-provoking thoughts to the public, with a focus, this year, on optimism. The 2021 series builds on the great success achieved in 2020, when Narrative Summit launched five seasons of its flagship online forum Reshaping Norms, receiving great follow-up on social media, hitting 11 million followers, 4.5 million views, and 3.5 million interactions.