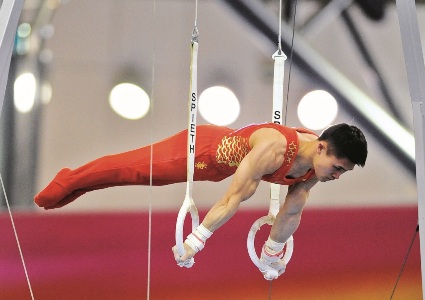 The FIG World Challenge Cup, featuring the world’s top female and male artistic gymnasts, is to kick off in Cairo on Thursday, in an opening ceremony that will be attended by a number of ministers.

The tournament, which Egypt is hosting, will run from 3 to 7 June, and will take place at the Indoor Halls Complex of the Cairo International Stadium.

It is expected that the opening ceremony will be attended by: Prime Minister Mostafa Madbouly; Minister of Youth and Sports Ashraf Sobhy; a number of ministers; heads of delegations and representatives of the game federation; along with Ehab Amin, President of the Egyptian Gymnastics Federation.

Sobhy said that the precautionary measures that Egypt has followed whilst hosting other international sports championships during the last period has ensured the country holds a unique position to host such championships.

The minister added that the strong impetus and the great vision of President Abdel Fattah Al-Sisi for sports in its various forms is one of the most important pillars of the success of Egyptian sports.

He noted that an emergency mini-committee was formed of representatives from the relevant ministries, to follow up all the executive work and monitor the progress of competitions. This would ensure that they take place without any obstacles.

This took place by ensuring the availability of all logistical and administrative equipment, adding that coordination took place with representatives from the Ministry of Tourism and Antiquities regarding the activities accompanying the tournament. This includes visits and tours to the most prominent archaeological monuments in Egypt.

For his part, Amin announced that all organisational matters for the championship are going well in accordance with the Egyptian Gymnastics Federation’s action plan, in agreement with the Ministry of Youth and Sports.

More than 300 female and male gymnasts will take place in the tournament.