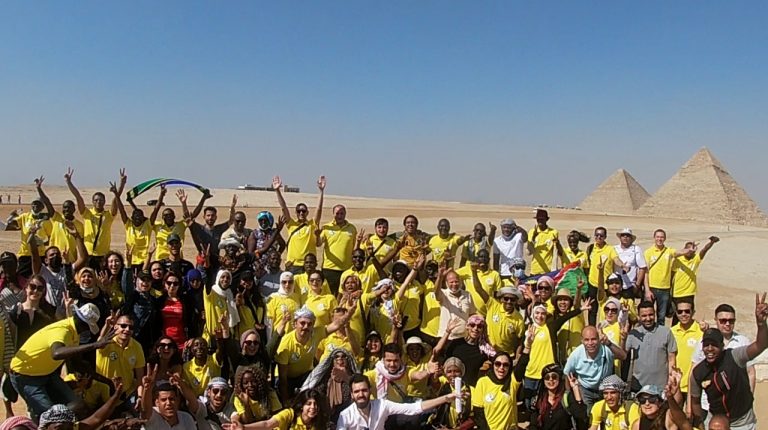 The participants in the Nasser Fellowship for International Leadership visited the Pyramids of Giza and Saqqara, on Friday, to learn about Ancient Egyptian civilisation.

The delegation was accompanied by Hassan Ghazali, General Coordinator of the Nasser Leadership Fellowship, and a group of officials from the Ministry of Youth and Sports.

The visit came on the fourth day of the Nasser Fellowship programme themed “South-South Cooperation”. This fellowship is organised by the Ministry of Youth and Sports, chaired by Minister Ashraf Sobhy, in cooperation with the National Training Academy, the Ministry of Foreign Affairs, and other national institutions.

It is taking place under the auspices of President Abdel Fattah Al-Sisi, and is scheduled to last until 15 June. The programme hosts distinguished young leaders from Asia, Africa, and Latin America.

Sabri Farag, Director General of Saqqara Antiquities, received the participating delegations and gave them a tour in the Giza Pyramid Complex. They were given a detailed explanation on the complex’s history and the construction of its pyramids, and took several group photos.

The Nasser Fellowship team was pleased to visit one of the ancient wonders of the world, and learn about Egypt’s treasures and great civilisation.

Hassan Ghazali, Coordinator General of the Nasser Fellowship, said, “The Nasser Fellowship for International Leadership builds on Egypt’s ongoing efforts, following its chairmanship of the African Union (AU) for the year 2019, to strengthen the African youth role by providing them with all forms of support, habilitation and training, in addition to empowering them to occupy leadership positions, in order to capitalize on their capacities and insights.”

He added that it is also one of the executive mechanisms of: Egypt Vision 2030; 10 principles of the Afro-Asian People’s Solidarity Organization; Africa Agenda 2063; Sustainable Development Goals 2030; South-South Cooperation; African Union Roadmap on Harnessing the Demographic Dividend through Investments in Youth; and the African Youth Charter.

The Nasser International Leadership Fellowship aims to popularise Egypt’s longstanding experience in national institution-building. It also aims to create a new generation of young transformational leaders, whose vision aligns with the directions of the Egyptian presidency, in various countries.

This is with the aim of connecting the most influential young leaders through the necessary training, skills enhancement, and application of strategic visions, added Ghazali.

He also explained that the Nasser Fellowship Second Edition had extended to include youth leaders from Asia and Latin America, in addition to Africa. A total of 100 young leaders from the three continents were selected to participate in the Nasser International Fellowship.

The first Nasser Leadership Fellowship Cohort was launched in June 2019 under the auspices of Prime Minister Mostafa Madbouly. It targeted young African executive leaders from different professional disciplines within their own communities, with the objective of popularising Egypt’s development experience in institution and national character building.