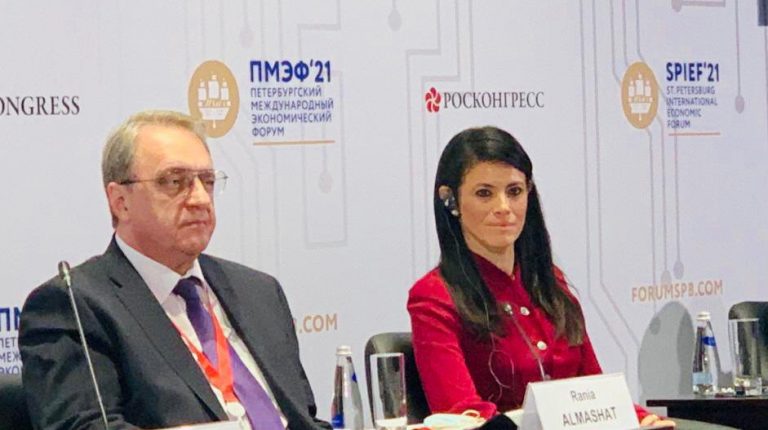 Egypt’s Minister of International Cooperation Rania Al-Mashat has said that the country can serve as a link strengthening Russian-African economic relations.

Minister Al-Mashat also reviewed the available opportunities that would enhance Egyptian-Russian-African cooperation, within the framework of her country’s distinguished position and its strategic relations in Africa.

The minister’s remarks came duringher participation in the Russia-Africa session that took place as part of the 24th St Petersburg International Economic Forum (SPIEF) in Russia on 2-5 June.

She said that Egypt serves as a link through which the tripartite Egyptian-Russian-African cooperation would be strengthened. This is because the country is a member of the initiative to develop Africa’s infrastructure, which opens the door for tripartite partnerships to further implement infrastructure projects.

During the session, the discussion revolved around the impact of rapid global changes during the pandemic. It also looked at Russia’s business strategy in Africa in the coming period, particularly in the health, food security, infrastructure, and education sectors, as well as potential collaborations and projects.

During her speech, Minister Al-Mashat stressed the importance of the Egyptian-Russian relations that have grown over past years.

This strategic partnership is reflected in many major projects being implemented, such as: the Dabaa Nuclear Power Plant project that costs $25bn; and the Russian Industrial Zone in the Suez Canal Economic Zone (SCZone), which is expected to bring in investment amounting to $7bn.

Minister Al-Mashat mentioned that the Russian-African Summit and Economic Forum was co-chaired by Egyptian President Abdel Fattah Al-Sisi and his Russian counterpart Vladimir Putin in 2019.

The minister highlighted Egypt’s regional role as the gateway for Russian businesses in the African continent in light of strong Egyptian-African relations. She added that private sector companies are implementing many development interventions across the continent

Minister Al-Mashat pointed out the possibility of establishing an investment fund that encompasses Egypt, Russia, and Africa with the aim of activating economic, trade, and development cooperation. The investment shall focus on the development of the infrastructure sector across Africa.

She further elaborated that the Russian Industrial Zone in Egypt will be a gateway to Africa due to its strategic location and its strong infrastructure.

The minister stated that Egypt has undertaken Free Trade Agreement with countries of the Eurasian Economic Union (EAEU), namely Russia, Belarus, Kazakhstan, Kyrgyzstan, and Armenia. This agreement could play a key role in strengthening the Russian-African Trade Exchange between the African and the European Union (EU).

It could also play a role in the establishment of vocational training and entrepreneurship centres in partnership between Egypt and Russia. The training centres will be based in Egypt, where there would be an exchange of experiences and visions in order to train African employees, with an emphasis on the small and medium-sized enterprises (SMEs) sector.

Minister Al-Mashat also talked about the economic and investment relations between Egypt and Africa, noting that Egypt is working in parallel to strengthen mutual relations with various African countries by implementing projects under the African Union (AU).

She affirmed that the joint African relations are a huge opportunity to accelerate growth, as the area of the African Continental Free Trade Area (AfCFTA) agreement will contribute in reducing commodity prices.

At the same time, it will increase Africa’s competitiveness on the global level which would also attract more investments. The continent’s population rate is very high, with indicators estimating that by 2050, it will contribute to a 50% population growth rate, which enhances the available opportunities for growth.