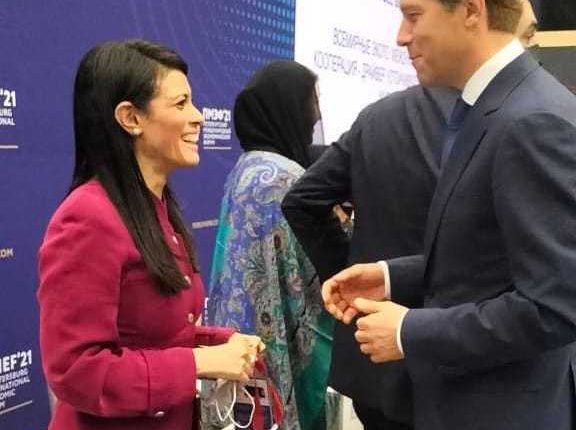 Egypt’s Minister of International Cooperation Rania Al-Mashat has met with Russia’s Minister of Trade and Industry Denis Manturov to discuss bilateral economic and trade cooperation between Egypt and Russia.

Minister Al-Mashat reviewed areas of strategic cooperation between Egypt and Russia, such as the Dabaa Nuclear Power Plant project. The meeting also covered the necessary means for enhancing trade volume, and attracting Russian investments in development sectors of cooperation.

Meanwhile, she also urged the Russian side to invest in various national projects, whilst highlighting the Russian Industrial Zone in the Suez Canal Economic Zone (SCZone).

The minister emphasised the possibility that Russia may benefit from the Egyptian market as the central hub for the entry of Russian products into Arab and African markets.

This is in addition to the supply of 1,300 train cars to the Egyptian National Railways Authority (ENRA) through a Russian-Hungarian alliance, represented by Russia’s Transmashholding Company.

The two sides also discussed the importance of negotiations for a free trade agreement between Egypt and Eurasian Economic Union (EAEU) countries. This will be reflected on the increase of the volume of Egyptian exports to the countries within the Union.

Minister Al-Mashat further discussed the distinguished trade relations between Egypt and Russia, as the volume of trade exchange reached $3.8bn in 2019.

This would capitalise on the ongoing portfolio encompassing 472 Russian companies investing in Egypt, making up for $1bn of issued share capital in various fields including tourism, industry, services, and petroleum.

The two ministers also discussed future areas of common cooperation to implement several joint projects in development sectors such as: oil and gas; transportation; infrastructure; energy; mining industries; as well as the construction of silos and development of logistical areas.

The SPIEF, held in the Russian city of St Petersburg, is an economic event that has been taking place on an annual basis since 1997. It has been a leading global platform for the business community to discuss economic challenges faced by Russia, emerging markets, and other countries for the last 24 years.