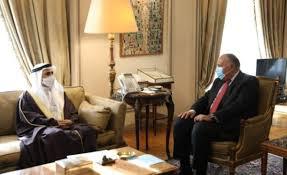 Egypt has strongly condemned a missile attack, on Saturday evening, by the Houthi militia which targeted the Yemeni city of Ma’rib, which resulted in the deaths and injury of dozens of civilians.

Egypt also expressed its sincere condolences to the government and people of Yemen, and to the families of the victims of the crime, whilst wishing a speedy recovery for the injured.

It also voiced its support for the Yemeni government, reiterating its demand to stop the attacks, whilst working to give priority to the interests of Yemen and its people.

Egypt stressed the importance of reaching a comprehensive political settlement in accordance with agreed international references, in order to spare civilians, and to put an end to the protracted humanitarian crisis in Yemen.

For its part, the Arab Parliament also condemned the bloody massacre committed by the Houthi militia.

In a statement, on Sunday, it said that these terrorist crimes represent war crimes and crimes against humanity, and require urgent international trial for their perpetrators.

The statement said that it comes as an extension of the crimes and terrorist attacks carried out by the Houthi coup militia against innocent Yemeni civilians, especially in the Ma’rib Governorate.

These crimes reflect its persistence in undermining all regional and international efforts to resolve the crisis politically, and its blatant defiance of the international community.

The Arab Parliament affirmed its full solidarity with and support for Yemen in all the measures it takes to confront the crimes and terrorist acts carried out by the Houthi coup militia.