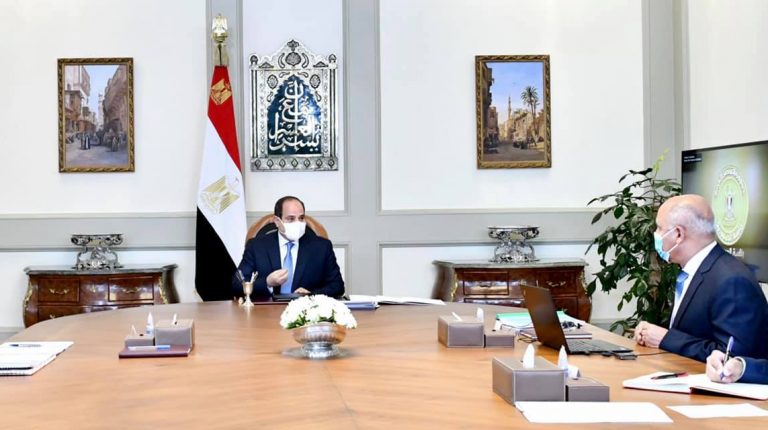 Egypt’s President Abdel Fattah Al-Sisi was briefed, on Sunday, on the steps for implementing the ATS smart transport system on main highways.

The briefing took place during a meeting with Prime Minister Mostafa Madbouly, and Minister of Transportation Kamel El-Wazir.

Presidency Spokesperson Bassam Rady said that the meeting dealt with following up on the executive position of the Ministry of Transportation’s projects, especially relating to the development of roads and axes nationwide. It also dealt with a review of the developments of Egypt’s railways and seaports.

El-Wazir reviewed the steps for implementing the ATS smart transport system on axes and highways, whose first phase includes a total of seven roads with a length of 1,187 km.

The president directed for the speedy completion of this phase, and for the implementation of the second phase to start, including 14 roads with a length of about 5,000 km. This is with a view to applying the highest standards of security and safety on roads and axes, whilst also maintaining the health and safety of citizens.

Al-Sisi also reviewed efforts to develop the Ring Road surrounding the Greater Cairo region, through its expansion. This work will aim to raise its efficiency, and will see the implementation of new traffic axes with all services, to connect it with urban communities on both sides of the road.

In this context, Al-Sisi directed for the full development of these axes to increase the efficiency and availability of services in the surrounding areas, as part of an integrated development framework.

He also directed for development of the Ring Road to be completed by December 2021, as well as the establishment of alternative workshops for those located below the Ring Road in a separate services complex.

With regard to the development of Egypt’s port systems, the President directed for the preparation of an integrated study to establish the El Max Port between Alexandria and Dekheila ports.

The President also directed for the construction of the new Bashteel railway station in accordance with the highest international standards, in order to upgrade the services provided.