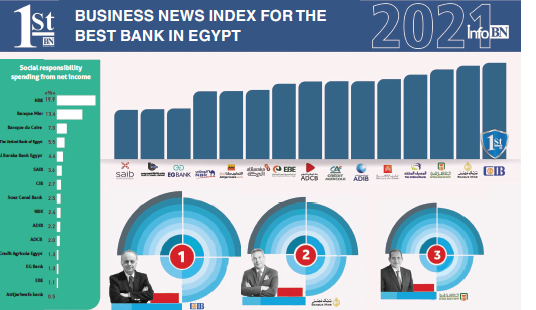 Business News has revealed the results of its 11th annual index measuring banking performance in Egypt, awarding the Commercial International Bank – Egypt (CIB) as Bank of the Year in Egypt for 2021.

CIB’s ranking in this year’s index is the second consecutive year that it has taken the lead position.

CIB also topped the Business News Index of the most efficient banks, after it ranked first in the sector in terms of a net return margin (NIM), achieving 6.7%. It was also the best performer in terms of operating costs, compared to income at a rate of 20.4%, ranking second in the most important sub-indices, with a Tier-1 capital adequacy ratio at 28%.

In the technology index, the bank came in second place, and was the third largest bank in the banking sector in terms of spending on technology out of total investment spending CAPEX at a rate of 53%. CIB ranked first in the digital services sub-index with Banque Misr.

With regard to growth rates, CIB was not among the fastest growing in the market, as its assets grew by 10.2%. As a result, it saw a decline in its market share, similar to most of the banks working in the Egyptian banking sector during the past year.

The bank faced fierce competition for the top spot in the efficiency index from QNB Alahli, which came second with a very slight difference, as a result of the latter’s strong performance in lending.

QNB Alahli employs 74.4% of its deposits in loans, ensuring it shared top spot in the loans to deposits index with Attijariwafa Bank. It also maintained one of the lowest operating cost rates in the sector, with a rate of 22.34%, and came third on the return on average assets index (ROAA), at a rate of 2.75%.

Faisal Islamic Bank topped the Business News sub-index for the adequacy ratio of tier-1 capital in relation to risk-weighted assets by 29.7%.

Banque Misr maintained its lead in the Business News Index of the fastest growing banks for the second year in a row, thanks to its expansion of its market share at the highest rate in the sector.

Banque Misr and the National Bank of Egypt (NBE) issued certificates with a 15% return in mid-March of last year, in coordination with the Central Bank of Egypt (CBE). The move comes as part of emergency response plans following the spread of the novel coronavirus (COVID-19) pandemic, which helped it to significantly increase its financial position and market share.

Among the six sub-indices under the Business News Index of the fastest-growing banks, Banque Misr issued three of them, and it was close to the lead in the other three indices.

The bank came in first in Return from Income, which grew by 62.1%, operation revenues, which saw growth of 51.7%, and market share, which hit 9% last year. The bank also came in second on the asset volume growth index, at a rate of 26.9%, after Attijariwafa Bank, which was the fastest growing in asset volume at a rate of 28.6%.

Attijariwafa Bank ranked second, by a significant difference, on the Business News Index of the fastest growing banks, ahead of Abu Dhabi Commercial Bank (ADCB) which came in third, and Abu Dhabi Islamic Bank (ADIB) which came in fourth.

The NBE topped the Business News Technology Index, which is the third main Business News index that makes up the Bank of the Year index after growth and efficiency.

The bank continued its policy of expanding its technological services, in addition to owning the largest number of ATMs in the sector compared to the number of branches, at a rate of nine ATMs for each branch, a large difference from its nearest competitor.

The NBE also came second on the digital services sub-index after CIB and Banque Misr, which shared the top spot in this index. This was in addition to having the largest number of channels of communication with customers in the sector.

This compensated for the bank’s relatively late position on the technology spending index, with its total investment spending CAPEX placing it in sixth with a rate of 34%.

Crédit Agricole Egypt topped the technology spending index with a rate of 58% of its investment spending. This reflects the bank’s desire to expand the provision of its services through digital means, which placed it in third on the Business News Technology Index after CIB in second, and the NBE in first.

It also reflects the Egyptian Government’s great dependence on its owned banks in implementing programmes to improve services provided to local communities.

The index is issued annually by Business News to measure the performance of banks during the past year. It consists of 18 sub-indicators that constitute four main indicators, which in turn make up the Business News Index of the Bank of the Year.

The Business News Index’s Bank of the Year award is calculated from the outcome of the four main indicators combined. The indicators place the largest weight among the four indices on the most efficient banks, followed by the Growth Index, the Technology Index, and finally the Social Responsibility Index, which receives a lower relative weight.

The bank that succeeds in collecting the largest number of points, after calculating the relative weights, becomes the bank of the year.

The four main indicators are:

A- The Business News Index of the fastest growing banks:

This indicator measures the growth rates of banks during the year, and consists of six sub-indicators that measure growth rates in six main sectors:

3- The net income from the return

The main indicator of growth is extracted from these sectoral indicators, giving a higher relative importance to the market share growth indicator, the asset growth index and the loans index.

B- The Business News Index of the most efficient banks:

It measures the degree of efficiency of each bank depending on the performance results. It consists of seven sub-indicators to measure the bank’s performance during a year. These seven indicators show the extent of the management’s skill in achieving the greatest possible benefits for shareholders according to the least possible risks.

It also measures one of the important indicators for the real economy. It is the rate of lending to deposits. The seven indicators that make up the main indicator of the most efficient banks are:

The indicator of the adequacy of the tier-1 capital against risk-weighted assets has the largest relative weight, and then the return on average assets, due to its importance to the safety of the bank.

An indicator that aims to measure the extent to which banks are willing to adopt technology, automate and facilitate the banking operations provided for customers. This monitors spending on technology and ease of access to the bank’s services and products through modern technology, a trend that has escalated around the world with the spread of the COVID-19 pandemic.

The importance of this indicator was salient during the last period with the spread of the pandemic, and the difficulty of obtaining a banking service safely in light of the crowding witnessed by bank branches. This prompted the CBE to encourage banks to expand their services through technological means and the expansion of financial technology.

4- Banking services through technological tools (such as the Internet, mobile banking and e-wallet)

According to the calculations, the sub-index for services through technological tools has a higher relative weight compared to the other three sub-indices.

To measure the extent to which banking institutions are committed to serving and developing the surrounding community and developing the market in which they operate as well. It is calculated by measuring the rate of spending on social responsibility to net profits.

Central Bank of Egypt receives 24 bids worth $540.6m for T-bills in US dollars